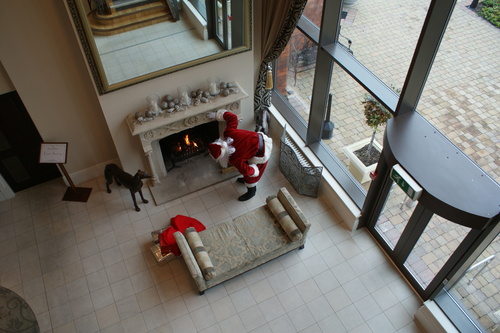 In the spirit of the festive season Rockliffe Hall has launched a short term incentive for businesses booking their event or conference to be held in January or February at the five star facility.

Anyone booking an event to be held before 28th February 2012, will receive a team away day for up to 10 people, an ipad2 or an iphone4.

“We all know how stressful it can be being the person booking an event or a conference, so Rockliffe Hall has decided to reward anyone taking on that responsibility. We have a choice of three fabulous gifts, for anyone booking an event worth more than £5,600 that takes place in January or February.

“The team away day options include Nordic walking, clay pigeon shooting, a golf clinic, or white water rafting for up to 10 people and a cost of £450. The choice between an away day or an ipad2 or iphone4 means that as an added bonus, there is something that will suit everyone.”

While the resort is popular with local businesses, large and small, it has also attracted many high profile and influential visitors from around the world. The Premier League recently hosted their summer summit at the beautiful venue with top club executives, following on from last year’s visit from FIFA officials in the region to inspect its credentials as part of the England World Cup 2018 bid.

The resort is well known for its five star service and meeting facilities in County Durham, recently having picked up the prestigious Conde Nast MICE award (2011) as well as winning multiple North East awards. The resort has also won the Business Tourism in the North East award, two silver awards for Outstanding Customer Service and Taste of the North East for the Kenny Atkinson at the Orangery restaurant. Spa Director Liz Holmes also recently was named Spa Professional of the Year at The Hotel Catey’s.

To find out more about Rockliffe Hall’s outstanding facilities or to make a booking please call the Events Team on 01325 729977 or visit www.rockliffehall.com/

Rockliffe Hall is the newest and most exciting hotel resort to open in the North of England. Set on a magnificent restored 18th century estate on the banks of the River Tees, it is a destination in itself and a five star home-from-home.