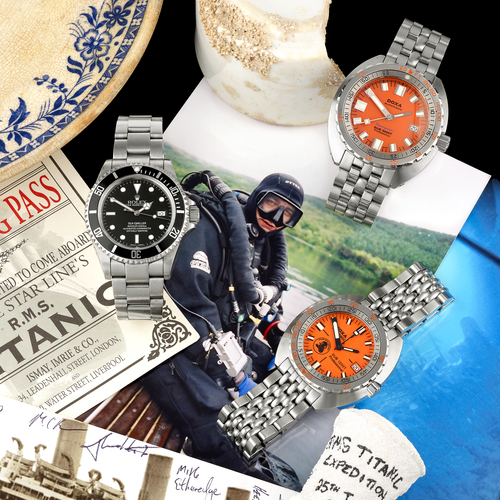 On Monday 23rd January 2012, Fellows will be auctioning watches and memorabilia from the estate of legendary deep sea diver, Carl Spencer. Born in Bloxwich, Walsall, Spencer was best known as a talented technical diver and for diving on famous expeditions. A modest man with a day job as a heating and air conditioning engineer, he always told people that he was "just a plumber from Cannock".

One of his expeditions was in 2000, when he joined the Bluebird project to locate and recover the body of the world water-speed record holder Donald Campbell from Coniston Water.

In 2003, film director James Cameron invited him to join the team to dive to the wreck of Titanic as part of a Discovery Channel expedition. Spencer acted as a research diver for the project and laid the groundwork for the television documentary “Return to Titanic”.

The same year saw another famous dive to the Titanic’s sister ship the Britannic, a hospital ship used in the First World War that was sunk off the Greek coast in 1915. It was Spencer who uncovered evidence that the ship had been sunk by a mine rather than a torpedo - a question which had long divided historians.

In 2007, he also joined the team that dived on the wreck of the R.M.S Cunard Carpathia - the ship that went to the rescue of the Titanic. This made him along with the last surviving Titanic member, one of only two people to have seen both ships.

Tragically in 2009, Spencer lost his life while diving back on HMHS Britannic. He was hoping to explore unseen parts of the ship.

Stephen Whittaker, Managing Director at Fellows Auctioneers said: “Carl Spencer was a world famous diver and this collection shows some of the remarkable dives that he took part in.”

Spencer’s Rolex Sea Dweller will feature as lot 225 with an estimate of £3,000 - £4,000. Two limited edition Doxa diving watches, also belonging to the deep-wreck diver, will be auctioned in the upcoming sale and will feature as lots 49 and 50 both with estimates of £1,000 - £1,500. Alongside these impressive watches will be memorabilia items from the wreck site of R.M.S Carpathia, Donald Campbell’s Bluebird and the Titanic, which will see the 100th Anniversary of its sinking in April 2012.

The Vintage & Modern Wrist Watch auction will contain over 250 lots and will take place on Monday 23rd January at 10am.

Memorabilia items start from lot 278 - 297 and will include items such as:
An unframed coloured print of Titanic, signed in ink by James Cameron.
A Mintons blue and white transfer plate recovered from the wreck site of R.M.S Carpathia

Spencer, alongside two other dive members were invited to be pall bearers at Donald Campbell’s funeral. In 2007, the team returned to Coniston Water to search for a missing piece of the boat’s frame and it was Spencer who ultimately found it.

On 24th May 2009 whilst diving back on HMHS Britannic, Spencer is believed to have suffered an attack of the bends, which can occur when divers surface too quickly and nitrogen bubbles form in the blood supply.
Viewing times for items in this auction are: