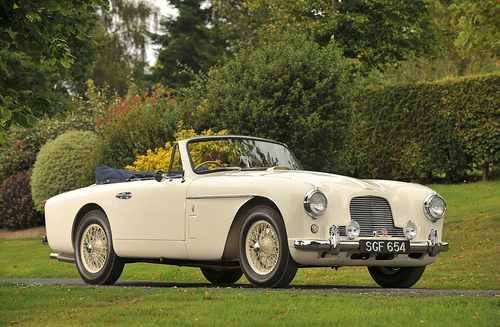 Classic cars are more than a safe place to “park” money; they really are better than gold. Annual figures for 2011, just released by the Historic Automobile Group International (HAGI), reveal that values in some segments of the classic car market have advanced by more than 20%.

By contrast, gold, the traditional safe haven in times of economic uncertainty, returned growth of just 9.93% in 2011. That means if you’d bought the right classic car your investment would have more than doubled the performance of gold.

Dietrich Hatlapa, 48, founder of the London-based independent investment research house HAGI (www.historicautogroup.com), said: “We’ve discovered that classic cars move independently of any other investment area, and that’s a very attractive attribute for collectors and investors alike in this day and age.”

HAGI, founded in 2007, produces a series of indices charting the top levels of the classic car market. The HAGI Top Index, measuring the performance of 50 key collectible classic cars, advanced by 13.89% in 2011. However, another HAGI index calculation reveals a segment of the top market that has achieved amazing 21.65% growth in 2011. That’s the return offered by the HAGI Top with Ferrari and Porsche removed. (In 2011 the HAGI F Ferrari Index advanced 10.58%, while the HAGI P Porsche Index returned a more modest 4.53%, after strong growth in previous years.)

Hatlapa, a former investment banker, commented: “The figures demonstrate very clearly that this is not a uniform market; performance varies from marque to marque and from model to model. Choice and timing are key, and that’s what makes it so fascinating, applying a judgement call on a model or marque you consider is due for rotation.”

Hatlapa also highlighted five models that have outperformed the general market in 2011:

In 2011 Hatlapa, a life-long classic car enthusiast, published a ground-breaking 350-page book, Better Than Gold: Investing in Historic Cars, a unique in-depth analysis and overview of the global classic market. For the first time Hatlapa quantified the capitalisation of the top sector of classic car market (cars worth more than £100,000) at £30 billion. In-depth historical research also revealed that this market sector, as measured by the HAGI Top Index, had increased by a factor of 30 in the 30 years from 1980 to 2010, returning a compound annual growth rate (CAGR) of more than 12.6%. Over the same period gold returned a CAGR of 2.17%.

However, while the figures are impressive Dietrich Hatlapa adds a note of caution: “Simply because a model, a marque, or indeed the overall market has performed well in the past, that does not mean it will continue to advance at the same rate in the future. Often there can be better opportunities among models that have perhaps underperformed and may therefore offer more up-side.

“This market is textured, multi-layered, highly segmented and also affected by changing tastes and fashions. However, long-term trends show that classic cars have historically provided a high degree of capital preservation, with attractive returns. Currently the market is undergoing a drive to quality and the advice has to be, buy the best in terms of history, condition, originality and provenance. Although the market experienced a dip in the second half of 2009, values for the best examples of the most desirable cars held firm.”

HAGI has a policy of not making public forecasts of potential future performance for individual models or marques, although the group does undertake bespoke research projects for individual and institutional clients.

Hatlapa concludes: “This sector has many attractions in this day and age: supply is broadly finite – they’re not making Bugatti Type 57SC Atalantes any more; the market is global; the asset class is uncorrelated with other investment classes; historic cars are a tangible asset with real asset characteristics, a highly sought-after feature since the financial crisis of 2007-09; once a model has become collectible it’s never become uncollectible. Plus, classic cars are fun to own and drive.”

Historic Automobile Group International (HAGI) is an independent research house and think tank specialising in the rare classic motorcar sector. The group has created benchmarks which track this alternative asset class accurately for the first time, using rigorous financial methodology usually associated with more traditional investments. Monthly updates can be found at www.historicautogroup.com. The HAGI Top Index is published monthly by the Financial Times (FT.com/reports/wealth) and in the specialist press. For more see www.historicautogroup.com.

Dietrich Hatlapa (48), founded HAGI in 2007. Prior to that he spent 18 years in international finance, most recently as head of an Equity Sales Team at Macquarie Bank and previously as Managing Director at ING Financial Markets and ING Baring Securities. He is a life-long classic car enthusiast, collector, event organiser, author and keen participant in historic motorsport. Book link: http://www.ypdbooks.com/business/378-better-than-gold-YPD003...

Dave Selby (52), senior analyst at HAGI, has been commentating on the classic car market for more than 20 years. He has written several books and has written widely on all aspects of the classic market in specialist publications and national newspapers. Dave also runs a classic car database detailing more than 70,000 precise individual transactions.