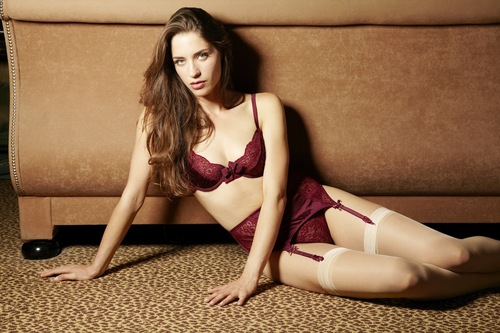 
London, 6th February 2012: UK men are well versed when it comes to buying designer lingerie for the object of their affections: they know their partner’s measurements, purchase at least 2-3 times a year and are more likely to experiment with the latest fashion trends, according to research released today by online luxury lingerie retailer Fox & Rose.

The survey asked over 500 British, French, Italian and German men about their habits and relationship with lingerie buying, traditionally a difficult topic for British men to navigate, and the findings revealed a very different picture to the popular myth that men can’t or are too shy to buy designer underwear for women.

Although French men may spend the most on lingerie each year (more than £250 and most likely to buy every month), they adhere to a more traditional view of underwear as a gift, 70% opting for red and none of the respondents keen to try fashion prints. Italian men spent the least – under £100 a year – and were most likely to opt for a timeless classic black look over racy red or style led prints with almost three quarters of German and Italian men opting for black.

“We were not surprised about the results of the survey. 40% of our customers are men and they spend a lot of time researching brands, styles and sizing as well as asking questions on what to buy. We decided to conduct the study after anecdotal evidence suggested that British men were fearless in their lingerie choices, often opting for high fashion prints by designers such as Stella McCartney or strong styling from labels like La Perla, “ said Amanda Lorenzani, Co Founder, Fox & Rose.

When it comes to romance in the bedroom, the survey also revealed that British men are most likely to appreciate the underwear aesthetic with 80% citing designer lingerie as the key element in creating the right mood over perfume, scented candles, sex toys or footwear. But French men are the most adventurous, having a more ‘push out the boat attitude’ and value champagne, sex toys and ambience on the same level as lingerie.

Lingerie in the bedroom is most important to both the Brits and the French, who are most likely to spend over £250 a year on spontaneous gifts, compared to the majority of Italians and Germans who spend less that £100.

When it comes to buying, German men prefer to go to specialist lingerie shops for their gifts, while more and more Brits and Italians are buying online. The French will buy everywhere, from online, specialist shops to the high street.

The name Fox & Rose is inspired by the online store’s customer. Every woman has two sides: The Fox is drawn to seductive, racier items, The Rose to elegant, more understated pieces – Fox & Rose responds to both sides of a woman’s character, catering for any occasion or mood.

Fox & Rose aims to work with the most talented graduates each year, giving them the opportunity to exhibit their work on the website’s Designer Spotlight and providing a showcase for innovation and new talent. Fox & Rose has teamed up with De Montfort University, the only university in the world to offer a contour design degree (now in its 61st Year).