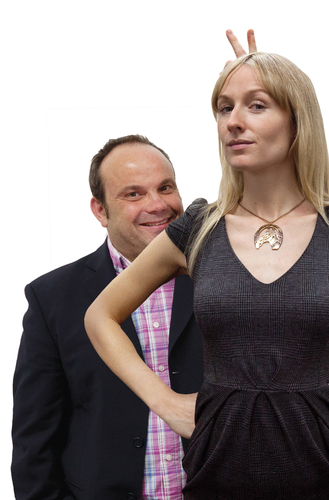 The script is absolutely hilarious. As soon as I read it I knew I wanted to be involved

Phil and Chris used to be the dream team picking up all the industry awards - but now they find themselves under constant threat from Rodge and Barney, who are only a short walk down the corridor.

Can Alex Judge, New York's 'hot and top suit' save the day? Or will Don just fire the lot of them...

We'll find out with the pitch for Jerri Co - New York wants this one bad - but Phil, Chris and Alex already face stiff competition from The Saliva Group.

Pitch Perfect, which is being performed at the Tabard Theatre (www.tabardtheatre.co.uk ), Chiswick, from February 21 to March 17, is being sponsored by High Street stationery giant, Ryman (www.ryman.co.uk), and Magic Whiteboard (www.magicwhiteboard.co.uk).

Jonathan Guy Lewis, who lives in Chiswick, west London, spent several months working in several leading media agencies researching the project and trained as an actor at the Guildhall School of Music and Drama.

His first play as a writer, which he also directed at The Soho Theatre and The Donmar Warehouse, was Our Boys which won The Writers Guild Award for Best New Fringe Play.

Pitch Perfect is produced by Simon de Cintra whose career started in the corporate world of pitching and included ten years working for American Express.

He then decided to follow his heart and embarked on an acting career by training with the Actors Company at the London Centre for Theatre Studies.

Simon, who lives in Croydon, combined his corporate and acting backgrounds by forming Act Naturally, with the aim of designing and delivering training workshops across a wide range of industries, specialising in personal impact, influencing and persuading and managing conflict.

Simon also takes one of the three lead roles in the comedy. He recently made his television debut as Frank Edwards, the Holby City creche manager.

The production also stars actress Louise Tyler from Enfield, North London. She said: "The script is absolutely hilarious. As soon as I read it I knew I wanted to be involved."

TV Dragon, Chairman of Boux Avenue lingerie and Ryman Stationery boss Theo Paphitis said: "In business terms, pitching can be a 'life or death' experience - at least that's what people tell me! When I heard about the project I was delighted to lend my support through Ryman and Magic Whiteboard. The play is about the real commercial world, so anyone who has ever had an important pitch should identify with the characters. The fact that it is comedy should make it a real winner!"