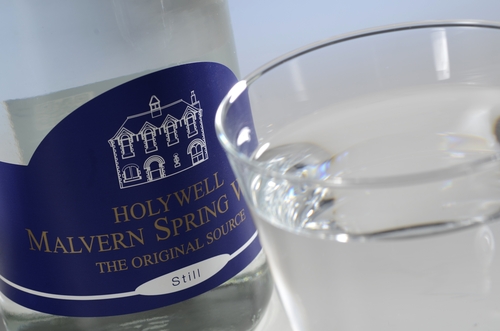 Water from the original Holywell spring in Malvern was first commercially bottled by Schweppes in 1843 and continued there for 54 years until the company moved production to a different site in 1897. Coca-Cola took over Schweppes and continued to produce Malvern Water from this site until the brand was dropped in 2010.

The Holywell Water Company took ownership of the original Malvern spring and 19th century building used by Schweppes in 2009, but despite bottling fresh spring water from this source the company was unable to use the iconic town in its branding.

Rhys Humm, Director of The Holywell Water Company, said: “I’m hugely excited about our subtle name change. The Holywell spring is indisputably the original source of Malvern water so it is fantastic that we can now include the prestigious Malvern name in our branding.”

He added: “It’s important that water from Malvern is still bottled and that the name and association is not lost forever. Our solicitors have done some fabulous work in registering this trademark and I hope that the public will be as happy as we are that we can use the term Malvern in relation to our pedigree water.”

The Holywell Water Company will be showcasing its newly branded bottles for the first time at the Hotelympia trade show at ExCeL, London, from the 26 February - 1 March.

The company has also taken this opportunity to include a QR code on its labelling which will take users on a video tour of the Holywell spring.

Issued by the HEART of ENGLAND fine foods Press Agency on behalf of The Holywell Water Company Ltd.
For more information contact Rhys Humm on 01684 568548 or email
info@holywellspringwater.co.uk

HEART of ENGLAND fine foods (HEFF) is the food group for the heart of England region. It was formed in 1998 to promote and raise awareness of local food and drink across Shropshire, Staffordshire, Herefordshire, Worcestershire, Warwickshire and Birmingham and the Black Country. HEFF is based at the Shropshire Food Enterprise Centre, Battlefield Enterprise Park, Shrewsbury.

Through an extensive programme, the organisation helps the region’s food and drink businesses to develop and create profitable and sustainable markets for their products.

The HEFF Press Agency is just one of a number of services offered by HEART of ENGLAND fine foods to support regional food and drink SMEs.