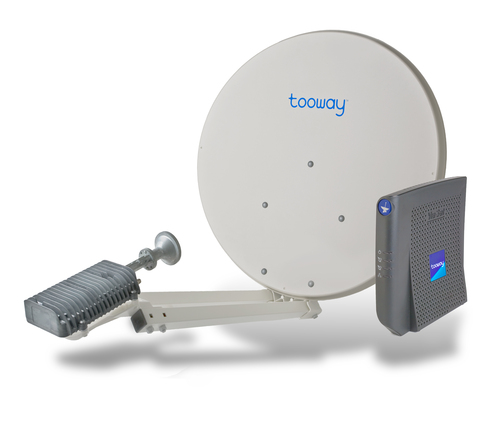 22nd February 2012 - Satellite broadband provider Skylogic today announced plans to install its Tooway™ new-generation broadband service in 20 of the toughest locations across the UK as part of its “Tough 20 Tooway Broadband Challenge”.

The company, a subsidiary of Eutelsat, Europe’s leading satellite operator, is inviting local authorities to suggest the toughest locations for connecting high-speed broadband services. It will install the Tooway™ 10mbps satellite broadband service in the 20 locations and provide a free service to the local community for 2012. The first locations will be announced in the coming weeks.

Steve Petrie, Skylogic’s Director for Tooway™ in the UK and Northern Europe said: “With over 40% of people in UK rural areas still not receiving broadband speeds greater than 2Mbps, it’s no surprise that many people still think that broadband is just not possible in Not Spots and Slow Spots. This may have been true in the past, but no longer. Tooway™ can deliver high speed broadband to everyone, everywhere and we intend to prove with the “Tough 20 Tooway Broadband Challenge” that there need be no exclusions to broadband access.”

Tooway™ provides users with an always-on service delivering speeds of up to 10Mbps downstream and 4Mbps upstream, with no need for a telephone line. Customer equipment comprises a small satellite dish (77 cm) and a sleek modem, which is connected to a PC or Mac via an Ethernet connection. Tooway™ can also be used for Voice over IP telephony and IPTV. Direct-to-Home reception of television channels from adjacent broadcast satellites is also possible with a dual-feed (Ku-Ka) LNB.

The new-generation service is delivered via Eutelsat’s innovative KA-SAT satellite, which has ushered in a new era of competitively priced, satellite-delivered IP services for homes and small businesses across Europe and the Mediterranean Basin. The satellite forms the cornerstone of a satellite infrastructure, which includes eight main satellite gateways across Europe connected to the Internet by a fibre backbone ring.

Councils wishing to suggest sites for the challenge are invited to contact Lorraine Jones to register their interest at ljones@rscassociates.net

Skylogic provides satellite broadband communications services for Internet access (via IP protocol) and for television transmissions to corporate enterprises and public bodies. The Turin-based company is a subsidiary of Eutelsat, Europe’s leading satellite operator. SkyPark, Skylogic’s teleport, houses one of the largest platforms in the world for two-way broadband IP transmissions. Skylogic’s satellite networks are interconnected by optic fibre to the largest operators in the sector, guaranteeing connectivity in Europe, the Mediterranean Basin, the Middle East, North Africa and America.
For further information visit: www.skylogic.com and www.tooway.com