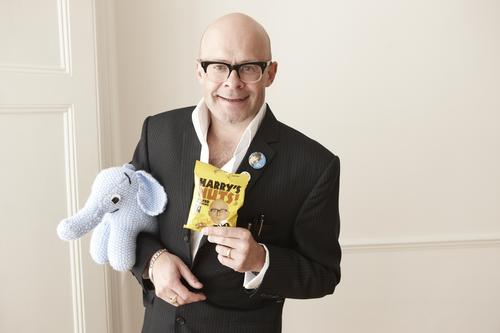 With the Asian elephant suffering from massive habitat loss and persecution where it feeds on crops, it is refreshing that Harry's Nuts! are grown in such a responsible way that works for both the farmers and the elephants

Harry’s Nuts!, the Fairtrade salted nuts from Harry Hill, have been declared ‘Elephant Friendly’ thanks to the work of Fairtrade cashew farmers in India in protecting an endangered species.

The snacks are available in Sainsbury’s, Waitrose and other outlets and the packs of cashews have an extra environmental boast with each munch.

The cashew farmers have used some of the extra money which comes with Fairtrade to protect wild Indian elephants which had been trespassing on their farms from the local forests. Farmers had found trees they had been growing for twenty years felled by the power of these elephants.

Wanting to protect their crops, farmers often fought back, risking both injury to themselves and the elephants.

The farming organision Fair Trade Alliance Kerala (FTAK) decided the farmers, their trees and the elephants needed to be protected and studied ways of keeping the animals at bay without hurting them. FTAK came up with the idea of investing the Fairtrade premium on solar panels to power electrified fencing around the farms. This provides a very mild shock.

“The shock deters but does not injure the elephants, so these cashews are now elephant-friendly,” explains FTAK’s Tomy Mathews.

Dan Bucknell, Head of Conservation and Campaigns of the charity Elephant Family, says:
"With the Asian elephant suffering from massive habitat loss and persecution where it feeds on crops, it is refreshing that Harry's Nuts! are grown in such a responsible way that works for both the farmers and the elephants."

The 3,200 cashew nut farmers are all part of an organic conversion programme and 45% of them have already achieved this certification. Organic methods are seen by the farmers as the best way of protecting their crops while protecting biodiversity. The farmers are operating in a 'biosphere' of exceptional biodiversity and take protecting this environment extremely seriously. There is also a focus on replanting indigenous breeds of cashew trees which produce a better crop.

The farmers were also concerned that an indigenous breed of goat, the ‘Malabari’, was becoming extinct – a breed which has far greater immunity to disease than crossbreeds, eats less fodder and is much cheaper to rear for milk and meat. They have started a breeding programme which sees a farmer being given a male and female goat and then passing on the offspring to another farmer.

Harry Hill works with Fairtrade nut company Liberation Foods on Harry’s Nuts!, currently available in two varieties – salted peanuts and salted cashews. Liberation’s biggest shareholder is a co-operative of nut farming and gathering organisations including FTAK. Managing Director Kate Gaskell says: "All of the nuts in Harry’s Nuts! are transporteded to the UK by sea - the most environmentally friendly form of long haul transport. Everything we do in our business reveals a respect for the environment as well as the farmer." Fairtrade has strict environmental criteria though it is, of course, best known for the fair prices it guarantees to farmers.

Harry’s Nuts! are popular for their taste – they are cooked for longer than other salted peanuts and cashews to give them an extra crunchiness and deeper flavour. They have been backed by celebrity food writer Sophie Grigson who says: "The peanuts have a very appealing creamy texture and a delicious sweet, rounded flavour enhanced by just the right degree of salt."

Harry launched the products after travelling to Malawi and meeting some of the peanut farmers, many of whom are women looking after Aids orphans. He heard that the benefits which come with Fairtrade are a huge help to them. Harry, a big peanut lover, says: "These Fairtrade salted nuts are an extra tasty version of my favourite snack and there’s no money in it for me (what a mug!). I’m working with Liberation and it's great that the company is run to benefit the farmers and their families."

Fairtrade Fortnight this year (February 27 - March 11) has the theme Take A Step For Fairtrade http://www.fairtrade.org.uk/step This is the latest step from Harry's Nuts!

Notes to Editor Harry’s Nuts! are sold in Sainsbury’s and Waitrose stores and other outlets. Prices are around £1.50. Harry’s Nuts! Crunchy Peanut Butter is available from 200 Sainsbury’s stores at a RRP of £1.99

Liberation Foods is co-owned by farming groups from Malawi , Mozambique , Bolivia , Brazil , Nicaragua , Peru , El Salvador and India . Farmers receive the guaranteed fair price which come with the FAIRTRADE Mark for their produce and receive a Fairtrade premium often spent on projects which benefit the entire community. They are also involved in the running of the company and will receive a share of profits when a dividend is paid.

Liberation is a Community Interest Company (CIC). This is a new type of company which has to be run for the benefit of a ‘Community of Interest’. For Liberation, the Community of Interest is small-scale nut farmers and gatherers in Africa, Latin America and Asia . As well as its own snacks, Liberation also supplies Fairtrade nuts to supermarkets in the UK and abroad for own-label products including Sainsbury’s, Tesco and Morrisons. Liberation works closely with the Fairtrade Foundation which administers the FAIRTRADE Mark in the UK.
See www.fairtrade.org.uk.