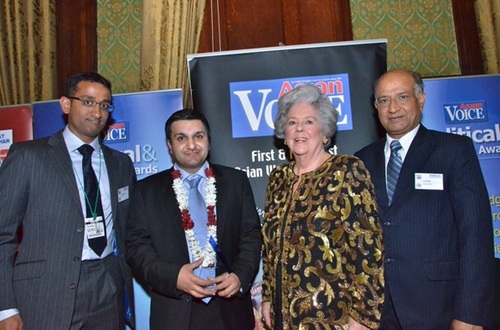 Chak 89, the most talked about restaurant in London won its first major award this year

Chak 89, the most talked about restaurant in London won its first major award this year to go alongside their previous portfolio of accolades, as “BEST RESTAURANT OF THE YEAR 2012” at the Asian Voice Political & Public Life Awards held at the House of Commons on Thursday 23rd February.

Among the guests at the prestigious awards night were Ed Miliband, Keith Vaz, the former House of Commons speaker Baroness Betty Boothroyd, Riz Lateef the BBC News Presenter, Nick Ferrari from LBC Radio plus many more.

Frank Khalid, owner and Managing Director of Chak 89 was pleased with the award and gave an outstanding speech, congratulating and acknowledging the effort that has been put into the Chak 89 Restaurant, to be amongst the best in the world restaurant market.

Receiving the award from Baroness Betty Boothroyd, Mr Khalid also praised the efforts of Keith Vaz and the Asian Voice team for organising and hosting the event.
Chak 89 has been awarded with many major awards as recognition for its exquisite Indian cuisine, ambience, decor and services which have also attracted many celebrities including most recently, former world heavyweight champion David Haye even he quoted “Chak 89 is truly a Spice above the Rest”