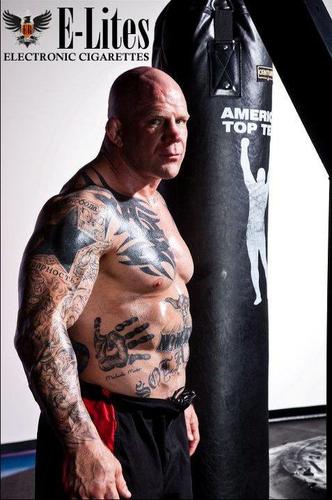 Mixed martial artist Jeff ‘The Snowman’ Monson, sponsored by leading electronic cigarette brand E-Lites, will take his fiery fighting style to the Ice Palace in St Petersburg when he competes in the headline heavyweight contest at this Saturday’s M1 Challenge 31 tournament.

American Monson, the two-time ADCC champion who signed a sponsorship deal with UK-based E-Liteslast year, will be up against the Russian-Ukranian competitor Alexey Oleinik in an MMA fight that will be watched by millions of fans around the world.

Monson, from Olympia, Washington, is a two-time winner of the ADCC Submission Wrestling World Championship and a NOGI Brazilian Jiu Jitsu World Champion.

A Mixed Martial Arts (MMA) and American Top Team member, Monson has a black belt in Jiu Jitsu as well as a professional boxing record of two wins and one draw.

Nicknamed ‘The Snowman’ after his runaway victory at the 1999 Abu Dhabi Combat Club Submission Wrestling World Championship, Monson was a newcomer who beat four Brazilians in a row in the 88-98kg weight class. His opponents described him as a snowball – white, compact, rolling and getting bigger and stronger as the tournament went on.

Adrian Everett, a founder and co-director of E-Lites said: “It’s great to see Jeff Monson stepping back into the spotlight at one of the most prestigious MMA events in the world. He’s a fantastic representative of everything we stand for at E-Lites – determination, integrity and excellence. Just like his fighting style, E-Lites have snowballed over the past year, with more and more smokers switching to our proven alternative. Our aim is to provide smokers with an enjoyable and authentic smoking experience – but one that is significantly healthier, better value and legally unrestricted for use in almost all public places. We hope by raising awareness on an international scale, even more smokers will be converted.”

E-Lites contain a solution of pharmaceutical-grade nicotine, purified water and tobacco flavourings. The internal components of the device are activated upon inhaling and turn this solution into a vapour which can be inhaled.

Crucially, E-Lites contain none of the tar, tobacco, carcinogens and added chemicals found in conventional cigarettes. They produce a vapour, rather than smoke, that has no strong smell.


E-Lites was established in the UK in 2007 and is already a leader in its field, producing some of the most advanced electronic cigarettes on the market. The company is expanding nationally and internationally as demand grows for its innovative products.

E-Lites’ revolutionary products are the result of extensive UK research and development. The evolution of E-Lites has been supported by significant investment in design and testing to ensure its electronic smoking devices are made to the highest standards and deliver the most authentic and luxurious smoking sensation possible. The company’s manufacturing facility uses the latest state of the art micro-electronic technology, ensuring E-Lites set the standard within the electronic smoking industry. E-Lites are globally patented, internationally trademarked, and are backed by an international parts replacement guarantee.