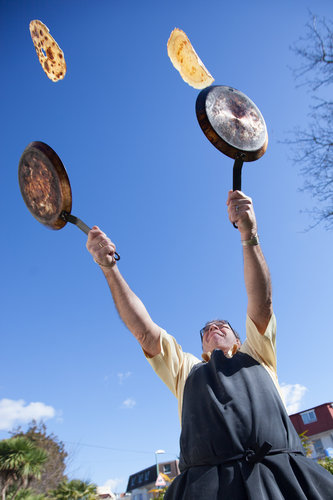 With specialist events including truffle shotput, extreme pancake tossing and chocolate wrestling, the event brings the spirit of the Olympics to the world of chocolate, according to Chocolate Delight’s chief chocolate officer, Gerry Wilton.

Ideal as a teambuilding or social event for groups of 10 to 400 people, ChocOlympics also includes chocolate relay, truffle table tennis and chocolate tug of war.

“At the crack of the pistol, teams must use their skills to create chocolate truffles and chocolate pancakes which are then used in a host of different events,” says Gerry, who also founded the Chocolate Boutique Hotel, which doubles as the HQ for Chocolate Delight.

“Teams from the same company then compete against each other before being entered into our national competition to decide who will be crowned ChocOlympics Champion 2012,” he adds.

“Individual chocolate medals for first, second and third places are awarded on a chocolate tiered podium and there is a chocolate trophy for our national winning team.”

To find out more about ChocOlympics, ring 01202 759979 or go to www.chocolatedelight.co.uk/chocolympics.html.

To find out more about The Chocolate Boutique Hotel, named one of the best six novelty hotels in the world by The Sunday Times Travel Magazine, ring 01202 556857 or go to www.thechocolateboutiquehotel.co.uk/

Founded in 2004 by the Wilton family, Chocolate Delight was one of the first companies to have a commercial chocolate fountain in the UK and quickly established itself as the leading chocolate fountain hire company. It was soon called on by corporates, event companies and celebrities to provide fountains for functions such as film premieres and weddings, including Peter and Jordan’s. In 2006, the Wilton family saw the opportunity to expand and bought a beautiful but outdated 19th century grade II listed hotel. Christmas 2007 saw the renovation of the building and it became The Chocolate Boutique Hotel, the world’s first chocolate themed hotel. Today, Chocolate Delight is one of the most successful UK chocolate companies in its field and holds Chocolate Workshops in 16 venues nationwide. Its Corporate Chocolate Teambuilding events commenced late in 2005 and are now run all over the UK and more recently in Europe. Last year saw Chocolate Delight in Spain, France, Austria and Switzerland.