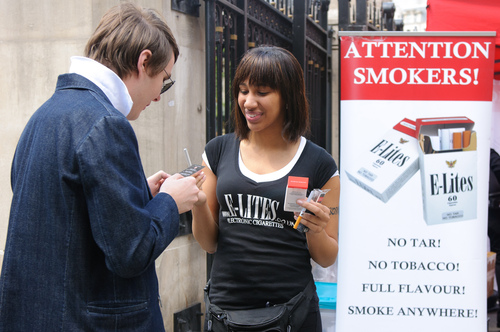 The tobacco duty hike expected in today’s Budget will encourage more British smokers than ever to switch to healthier and cheaper electronic cigarettes, according to leading brand E-Lites.

UK-based E-Lites has seen a four-fold increase in sales over the past year as the country’s estimated 10 million smokers grow tired of coughing up ever-increasing sums for traditional tobacco cigarettes.

Still feeling the effects of last year’s two per cent rise above the Retail Price Index (RPI), which pushed the average cigarette pack price to £7, even more smokers will be prompted to switch to electronic cigarettes, says E-Lites co-founder and director Adrian Everett.

“When increasingly harsh restrictions on the sale of tobacco are combined with rising prices, at a time when people have less money to spend than ever, smokers are feeling the pinch like never before,” he said. “Obviously, discouraging the use of tobacco products is a positive step but many smokers struggle to quit completely, so E-Lites electronic cigarettes provides them with a comparatively healthier, safer and cheaper alternative, which will become increasingly visible in shops over the next few months. Some have predicted a rise in the black market trading of tobacco and that’s something we all want to avoid.”

In a recent survey of 500 E-Lites buyers, more than a third (34 per cent) said that their primary motivation for switching away from tobacco cigarettes was to save money, while 44 per cent said this was the major reason for continuing to use E-Lites products on a permanent basis.

It is estimated that a typical 20-a-day smoker could save around £162 per month by changing from tobacco cigarettes to E-Lites electronic cigarettes.

The health advantages of E-Lites, compared with tobacco products, are equally compelling. Free of tobacco, tar and other toxins, E-Lites contain a pure nicotine solution that is vaporised upon inhalation, providing the user with a familiar and pleasurable sensation but without the most damaging consequences for their health.

In addition, E-Lites are legally unrestricted for use in almost all public places and since they fall outside the blank-out restrictions on the sale of tobacco, can be displayed in shops, pharmacies, supermarkets and convenience stores.

Its latest range of new-generation E-Lites includes the disposable device that provides the equivalent of 40 cigarettes and is priced at £9.99.