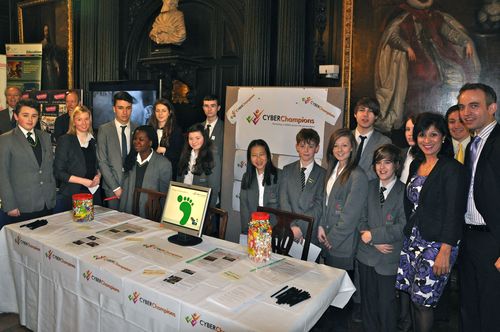 And get to try out the new Raspberry Pi

21 March 2012, London: Blackfriars Lane was bursting with energy yesterday, as the Apothecaries’ Hall held the first Livery showcase of its kind, with 18 Livery Companies hosting teenagers from over 25 London schools. The event was organised and sponsored by the Livery Schools Link and offered 300 London schoolchildren aged between 13 and 14 a unique opportunity to see and experience some of the skills and trades represented by the Livery Companies.

David Taylor, Chairman of the Livery Schools Link , said: “Our aim is to provide support to schools in London through the Livery Companies, and I was thrilled to see how much the students got from their visit. Our hope is the children now feel inspired and have learned about skills and professions they previously knew nothing about, as well as getting a sense of their city’s rich history. We were absolutely delighted to have had the opportunity of meeting so many children, and would particularly like to thank the students from Knole Academy in Sevenoaks, who did such a wonderful job in meeting and greeting visitors.”

In addition to providing an enriching experience, the showcase proved very successful in creating links between the Livery Companies and London schools, reinforcing the ancient traditions of promoting skills and professions as well as supporting education in the City of London.

Gary Phillips, head teacher at Lilian Baylis Technology School in Lambeth, whose new sixth form will be supported by the Worshipful Company of Information Technologists, said, “The Livery Showcase is a welcome event which connects our schools to the beating heart of UK industry. City Livery Companies have a proud heritage and it is important our students understand the role they play in providing awareness of job opportunities, giving academic and career direction and helping to ensure our young people realise their true potential. There is nothing like hearing things for yourself, and I am sure our students will benefit tremendously from meeting experienced professionals from diverse industries and be given much food for thought in terms of the important decisions ahead of them.”

To see photographs from the event visit www.facebook.com/PRGuild

Livery Schools Link is a voluntary organisation which aims to promote support for schools in the Greater London area by the Livery Companies of the City of London and their members, helping to prepare young people for the world of work.

We seek to act as the link between schools in need of help and members of the Livery who wish to offer assistance in any form. We act as a forum for the exchange of ideas and best practice in the field and maintain links with the educational community. We also run occasional events for our members on relevant topics. These can range from one day events to ongoing partnerships with a school. You can use this site to find out more about what we do and how to get involved.

Our mission is to assist children from less-advantaged backgrounds to receive an enhanced educational experience at school and to have their personal aspirations raised, thereby increasing their employability and career options.

About the Guild of Public Relations Practitioners:

The Guild of Public Relations Practitioners was formed in June 2000, and is part of the modern City of London Livery movement, which is believed to have begun before 1066. The PR Guild was one of the first City of London Guilds to have been created in the 21st Century, and its aims are shared with the broader Livery movement: charitable works and promoting best professional practices, while upholding the unique spirit and values of the Guilds.

The Guilds, or mysteries, from the Latin 'misterium', meaning professional skill, flourished throughout Europe for many centuries, but the City of London Companies, now collectively known as the Livery, are unique in their longevity, number and diversity. 'Livery' refers to uniform clothing as a means of identification. 'Guild' derives from the Saxon word for payment, since membership of these fraternities was, and is, paid for.

Public Relations is an essential activity in the City of London and the UK is a world leader in this profession. The Guild aims to:

Promote charitable endeavour, raising money and providing support for the Guild's Charitable Trust and other charities.

Promote the value of public relations and propagate its use, especially in the City and for the benefit of the City of London.

Develop support for education for both the younger and the more established public relations practitioners, including a mentoring scheme.

Foster good fellowship and discussion in the profession.

Charities recently supported by the Guild include Hi Kent, DeafBlind UK, and SignHealth, as well as the children’s charity Coram (as part of the Lord Mayor’s Appeal 2011).