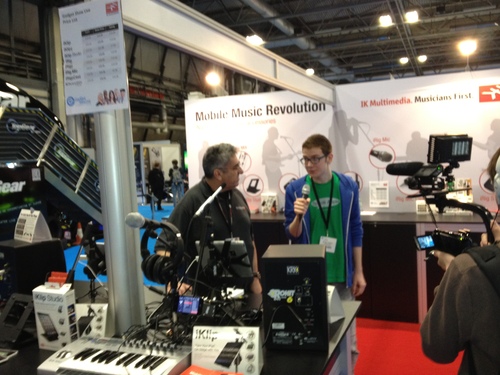 In the UK Widget distributes IK's products including iRig, the easiest way to link a guitar and an iPhone, iPod or iPad

Both products are designed and manufactured by IK Multimedia in Italy. In the UK Widget distributes IK's products including iRig, the easiest way to link a guitar and an iPhone, iPod or iPad, iRig Midi, which connects a MIDI device to an iPhone/iPod or iPad and iRig Mic, the first microphone for the iPhone/iPad/iPod.

• Provides a stereo mini-jack headphone output which enables real-time monitoring of what is being recorded using headphones or speakers.
• Offers a two way sensitivity mini-switch that provides settings for record close or distant sources.
• Includes an adjustable desktop stand for convenient iPhone/iPod touch positioning during recording.
• It includes 2 free apps: iRig Recorder, an easy-to-use voice recording/editing app, and VocaLive, a multi-effects processing app for singers.
• Works with all regular phone calls and any Voice-Over-IP app.
• Is compatible with iPhone/iPod touch/iPad.

iKlip Studio is innovative tool designed and created specifically for use in music studios, but can be used by anyone needing a sturdy, non-slip, multi-angle adjustment stand for all iPads, including the recently released 3rd generation iPad.

i iKlip Studio has a UK suggested selling price of £24.99.

Both products will be available at the Gadget Show Live, on Widget's stand C291 in the music zone.