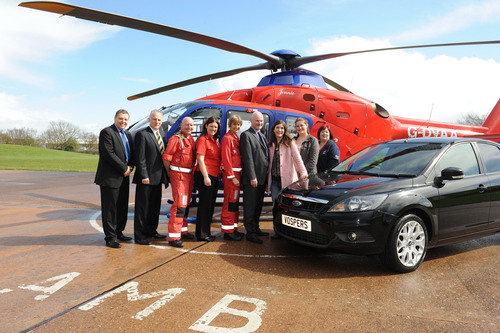 A hospital volunteer and supporter of Devon Air Ambulance Trust has been presented with a Ford Focus as the winner of the Motors.co.uk ‘Most Deserving’ competition.

The Motors.co.uk ‘Most Deserving’ competition to find a local hero which attracted more than 110 nominations has been won by Caroline Rutley-Frayne from Tiverton in Devon. Caroline was presented with a £10,000 Ford Focus advertised on Motors.co.uk by local dealers Vosper’s Motor House, and a £2,500 donation to the charity of her choice – Devon Air Ambulance Trust.

Phill Jones, commercial director at leading used car website Motors.co.uk, said, “Caroline was selected as the ‘Most Deserving’ for her fantastically positive attitude in her recovery from such a devastating experience. She clearly enjoys huge support from a wide cross section of her community. The car will make a significant difference to her quality of life so we are delighted to support her and Devon Air Ambulance.”

In 2008 Caroline was the victim of a collision caused by dangerous driver (since convicted) who hit the motorcycle she was riding with her husband. Caroline’s life threatening injuries and subsequently led to the loss of her right arm and leg. Her husband was killed in the collision. Caroline is rebuilding her life with a positive attitude that impresses everyone she meets. She volunteers at a local hospital and a school, and raises funds for Devon Air Ambulance Trust whose emergency helicopter attended Caroline and her husband.

Caroline Creer, Fundraising Director of Devon Air Ambulance Trust said, “It was a pleasure to meet Caroline today, and we are honoured to have played some small part in helping her win her car. We are also of course delighted to be the recipient of the charity donation. Caroline’s humility and courage is a true inspiration to us all, and I’m so pleased to see her being recognised in this way.”

Runners-up in the competition were business partners Jason Odle and Ben Davis who are highly innovative and successful in raising funds and publicity for Saint Michael’s Hospice in Harrogate, and Fi Star-Stone who offers a popular free advice service for new parents and raises funds for Save the Children.

Phill Jones concluded, “We were delighted by the response to this competition. We met some remarkable people who have all made the world a better place, so I am delighted to be able to show recognition of their work.”

About Motors.co.uk
Motors.co.uk is a leading used car advertising website that aims to make the process of finding the right car as easy as possible for used car buyers & the selling of used cars as straightforward and cost-effective for used car dealers.

For Media Enquiries, including requests for more information about the nominees, please contact:

This press release was distributed by ResponseSource Press Release Wire on behalf of SEPR in the following categories: Motoring, Transport & Logistics, for more information visit https://pressreleasewire.responsesource.com/about.