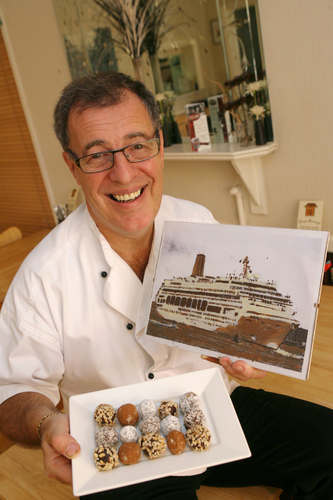 Success is proving sweet for top chocolatier Gerry Wilton, who is once again hosting his popular chocolate making classes on board a cruise ship.

Gerry, founder of popular chocolate events company Chocolate Delight, first found himself on the crest of a wave three years ago when he was asked to hold his floating chocolate workshops on board a superliner as it cruised Greenland and the Fjords.

Since then, his chocolate making sessions have proved so popular among passengers that he has now taken to the high seas for the sixth time, this time on board cruise ship Thomson Dream for a 14 night cruise of the Caribbean islands returning across the Atlantic to Madeira.

During the transatlantic crossing, passengers will be able to take part in six different 'Art of Chocolate Making' sessions run by Gerry.

"They're a great way of spending time during the days at sea. In fact, I do the truffle session twice to make sure passengers still have a supply of chocolates to take home with them after they have eaten the first batch."

To find out more about The Chocolate Boutique Hotel, named one of the best six novelty hotels in the world by The Sunday Times Travel Magazine, go to www.thechocolateboutiquehotel.co.uk ENDS

Founded in 2004 by the Wilton family, Chocolate Delight was one of the first companies to have a commercial chocolate fountain in the UK and quickly established itself as the leading chocolate fountain hire company. It was soon called on by corporates, event companies and celebrities to provide fountains for functions such as film premieres and weddings, including Peter and Jordan's. In 2006, the Wilton family saw the opportunity to expand and bought a beautiful but outdated 19th century grade II listed hotel. Christmas 2007 saw the renovation of the building and it became The Chocolate Boutique Hotel, the world's first chocolate themed hotel. Today, Chocolate Delight is one of the most successful UK chocolate companies in its field and holds Chocolate Workshops in 16 venues nationwide. Its Corporate Chocolate Teambuilding events commenced late in 2005 and are now run all over the UK and more recently in Europe. Last year saw Chocolate Delight in Spain, France, Austria and Switzerland.