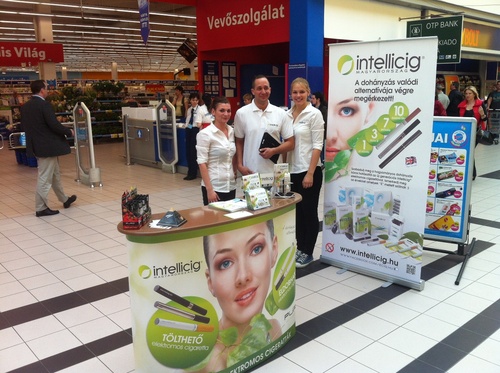 Intellicig – the leading UK producer and supplier of high quality electronic cigarettes and nicotine preparations –has announced that Tesco is hosting initial promotions for its e-cigarette range at three flagship locations in Hungary. This is an important step in Intellicig's European Distribution roll out strategy.

The promotion began last weekend, after Intellicig Distributor Zsolt Poprocsi had got agreement from Tesco Hungary to set up stands between the tobacco counters and the main entrances in key stores - thereby maximising attention and enabling customers to learn more about the innovative e-cigarette.

Up to now, Tesco have not been stocking any electronic cigarettes at its stores in Hungary.

“The promotion was very successful and we will be carrying on with the strategy over the coming weeks. In fact, we did more than simply promote Intellicig. The stands functioned perfectly as mini shops and Tesco customers were able to buy as well. Sales were brisk!”

Hungary was Tesco’s first international business and it is currently the market leader operating 166 stores around the country. Tesco employs over 21,000 people and is the 4th largest employer in Hungary (after the Hungarian Post Office, OTP Bank, and the Hungarian State Railways).

Intellicig and ECOpure, the company’s proprietary e-liquid, enables the company to maintain the highest standards of quality control over its specialised device. Intellicig’s in-house developed nicotine preparations are manufactured within the company’s own ISO approved laboratory at the world-leading UMIC Bioscience facility.

The recent cGMP award by the UK Medicine and Healthcare products Regulatory Agency (MHRA) is the latest formal recognition that Intellicig has a Quality Management System conforming fully to objectives and principles of EU Good Manufacturing Practice.

“We approached Tesco because - since Intellicig is an English manufactured product conforming fully to EU standards – we felt the company would be reassured by the quality on offer. Tesco has already shown a stronger willingness to work with us than with any other international brands.”

2. Headquartered in the Bioscience Incubator at Manchester University in the UK, CN Creative provides innovative and sustainable solutions to global problems arising from smoking and smoking-related illnesses. It has developed a distinctive portfolio of products and services focused on smoking cessation and harm reduction, including user-friendly nicotine delivery systems and patient-focused smoking cessation and support services.

4. Tesco entered the Hungarian market in 1995 through the acquisition of existing retailer S-Market’s 26 stores in the North-West of Hungary.

5. Hungary is world-leading in its use of geo-thermal and solar and Tesco are working with the Hungarian government by creating a Green “Cluster” in Budapest.