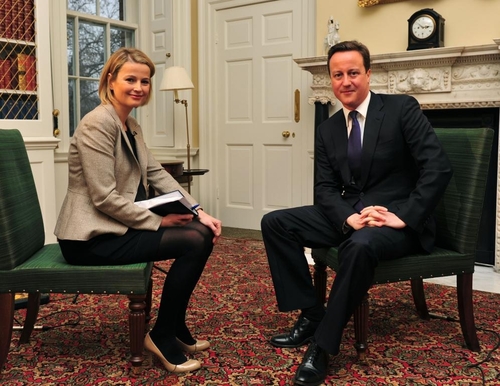 we can reach out to a much wider audience – not just those serving and their families, but also anyone with an interest in defence news

Daily news for British Forces personnel and their families

As all British Forces personnel and their family and friends will testify, separation from loved ones for weeks and months on end can make for testing times, and returning home from active duty to deal with everyday life can prove equally difficult.

But now making a firm and regular connection is British Forces News, the flagship TV news programme for the British Armed Forces, broadcasting every night at 6.30 pm on Information TV (Sky Channel 231 and Freesat Channel 402). British Forces News brings the latest stories that matter to the 173,000 British Forces personnel posted in UK and overseas, to their families and friends and to Forces veterans.

British Forces News is currently transmitted in 17 countries every weeknight at 18:30 CET on BFBS1 and to HM ships through Navy TV.

Presented by Kate Gerbeau, the 30-minute news magazine brings the latest stories from Afghanistan, Germany, Cyprus, the Falklands and the many other locations worldwide where British Forces live and work. It covers issues of warfare, defence policy and military strategy, and runs in-depth reports on matters relating to welfare and family wherever British Forces and their loved ones are located around the world.

News Presenter Kate Gerbeau said:
“Until now, British Forces News has only been available to British Forces on an encrypted satellite, but by launching on Information TV, we can reach out to a much wider audience – not just those serving and their families, but also anyone with an interest in defence news. We don’t just report on breaking national and international stories, we also provide unrivalled in-depth reports on all the issues that matter to service personnel including stories of bravery and sacrifice.”

Fred Perkins, CEO of Information TV, commented:
“We are delighted to welcome British Forces News to our current schedule and we look forward to supporting and developing the service as it becomes more widely established in the UK. British Forces News is of enormous importance to the Forces. By reporting news from across the deployed world it enables all service people and their families, regardless of where they are based, to make that vital connection.”

Watch British Forces News, weeknights at 18.30 (CET) on BFBS1 around the Forces world, online at www.bfbs.com/news, and in the UK at 18.30 (UK time) on Information TV, via Sky Channel 231 and Freesat Channel 402.
BFBS also broadcasts news updates around the clock on BFBS Radio - tune in on DAB Digital Radio in the UK, on FM across the Forces world, on Sky Guide 0211, Freesat Channel 786, www.bfbs.com and via the BFBS smartphone app.
If you have family, friends or loved ones currently based overseas with the Forces, then remember you can send a message of support online at www.bfbs.com/messages

About The Services Sound and Vision Corporation (SSVC)

BFBS’s British Forces News programme is run by the Services Sound and Vision Corporation, a registered charity set up to entertain and inform Britain's Armed Forces around the world. Its mission: to be the preferred provider of entertainment and information to Service personnel and their families worldwide.

SSVC’s work makes a considerable contribution to the maintenance of the efficiency and morale of the three Services. Our activities are carried out directly for the Ministry of Defence. Any profits are donated towards Forces' welfare. The activities and services run by SSVC include:

Over 8 years, Information TV has established itself as one of the UK’s leading providers of broadcast TV services with its flexible turnkey solutions for businesses, organisations and brands aiming to establish an independent broadcast presence on the UK’s largest digital TV platforms - BSkyB and Freesat, digital terrestrial (Freeview) - and via broadband on the internet. On 19 November 2010 Information TV won a prestigious Eutelsat Communications HOT BIRD™ AWARD for its innovative business model.

With its flexible, low-cost, low-risk broadcast solutions, Information TV has gained a proven track record in helping business and organisations reach their broadcasting potential through a variety of formats. Through Information TV, many businesses and organisations have established a broadcast presence in the UK, including: dedicated 24/7 channels (e.g. Russia Today), channels reaching niche audiences through digital TV (e.g.The Caravan Channel) and direct communications with specific audiences & stakeholders (e.g. BP and ASDA).

As one of the few broadcast TV businesses to incubate start-up TV channels, Information TV also helps organisations develop new micro-channels, programmes, formats and concepts for broadcast content which occupies too specific a niche to justify a dedicated channel.