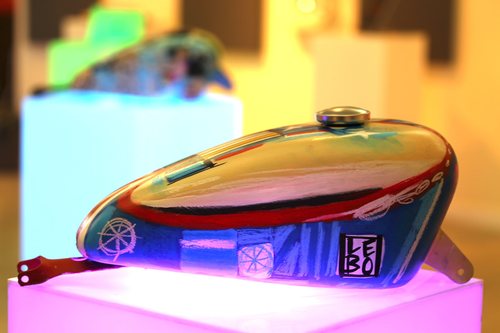 Harley-Davidson®, the world’s most iconic motorcycle brand renowned for its rich heritage in customisation and self-expression, has teamed up with some of the best contemporary artists from across the globe to launch the ‘Art of Custom’ design competition that will search for inspirational new art to appear on bespoke Harley-Davidson fuel tanks.

The ‘Art of Custom’ Campaign and Competition was launched to the world’s media in Miami’s acclaimed Wynwood Art District, an area famous for providing walls to act as blank canvases for the world’s most celebrated street artists. Ambassador and artist ‘Lebo’, whose art graces the walls and galleries of Wynwood, has kicked off the campaign by custom designing three tanks which not only bring to life the spirit of Harley-Davidson, but are also featured on the new Harley-Davidson Digital Tank Wall; an on line version of the real-life wall housed in the Harley-Davidson Museum, Milwaukee, USA.

To provide inspiration to entrants, a number of artists including Lebo and renowned Irish character artist Terry Bradley, have customised a selection of Harley-Davidson tanks with their own original artwork (see attached imagery).

As well as the new tanks, the new online Harley-Davidson Tank Wall will also showcase some of the most iconic designs from the past century including the classic 1971 Willie G. Davidson designed ‘FX Super Glide’ and the 2008 ‘Cross Bones’ which formed the basis for the motorcycle ridden by Captain America in the 2011 Hollywood film.

Live throughout April 2012, budding artists and designers can download the tank template and bring to life their own interpretation of the Harley-Davidson spirit in whatever style and way they wish. From paints to graphics, entrants can use the tank as a blank canvas to express themselves just as the Harley-Davidson styling team have done for over one hundred years.

Site users will vote for their favourite designs with the top 50 going forward to a panel of judges, including members of the Harley-Davidson Styling Team, competition ambassador Lebo and Terry Bradley who will whittle the competition down to the final 10.

The public can then cast their votes to select the winner who will receive the experience of a lifetime. They will visit the home of Harley-Davidson in Milwaukee, Wisconsin to see their bespoke design re-created on their very own mechanical masterpiece; the Harley-Davidson Sportster. Two runners up will have tanks customised with their design and displayed at the famous Harley-Davidson museum.

The competition offers an amazing opportunity to be expressive, artistic and embrace all that Harley-Davidson stands for. Closing date for entries is Monday 30th April 2012.

For enquiries and interview requests, please contact Jack Shilling at Lexis Agency on +44(0)20 7 908 6457 or jshilling@lexisagency.com

This press release was distributed by ResponseSource Press Release Wire on behalf of The Lexis Agency in the following categories: Men's Interest, Entertainment & Arts, Motoring, for more information visit https://pressreleasewire.responsesource.com/about.