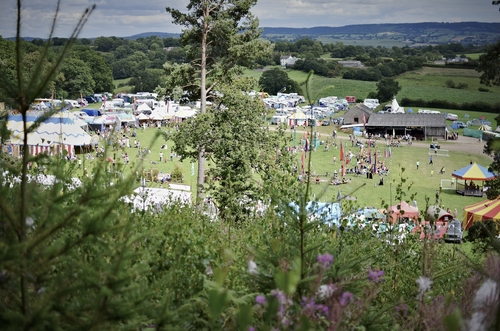 There are so many exciting acts this year- while you’re here on your UK family break you won’t be able to stop dancing and you’re bound to leave with a new favourite band!

Croissant Neuf, the multi-award winning solar powered family festival set in the Usk valley, has announced that the line-up for the 2012 Summer Party. Since it began in 2007, the festival has gained a reputation for being a great destination for a UK family break due to its friendly feel and community spirit.

Mercury Music Prize nominee Seth Lakeman wil be appearing, in addition to Willy Mason and Clannad singer Moya Brennan. The Folk, Cajun and Ska tinged line-up will also include favourites Laid Blak and exciting breaking bands such as This is the Kit and Gabby Young and Other Animals.

It may be a fallow year in Somerset but multi-award winning Croissant Neuf Summer Party lets you enjoy the greenest slice of Glastonbury Festival in the beautiful Usk, Monmouthshire. Croissant Neuf’s Big Top (which has been at the heart of this petite, character-filled eco-inspired festival since its conception in 2007) has also been the focal venue of Glastonbury’s Greenfields for the past 25 years and is the largest solar powered venue in Europe. Hundreds of music’s heavyweights have delighted crowds in the Big Top over the years and 2012 is no exception, as Festival Director Luke Howell explains

Every year we've tried to bring the best musicians in the world to CNSP and every year has bettered the next. This year we've put together our strongest music line up yet! Our team have managed to combine the highest quality bands with new and emerging talent that will wow the crowds. There are so many exciting acts this year- while you’re here on your UK family break you won’t be able to stop dancing and you’re bound to leave with a new favourite band!

With a sound that recalls Bob Dylan and Johnny Cash; acclaimed American singer/songwriter Willy Mason has developed a loyal and large following in the UK. Championed by musicians such as the Chemical Brothers and Radio 1 DJ Zane Lowe, Willy Mason has even undertaken a tour that included fans living rooms.