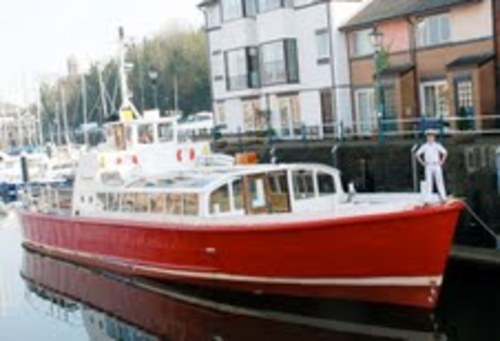 the ship has the largest capacity of all the tourist carriers operating from the Bay and will also be the longest, heaviest and tallest

A brand new sightseeing venture is to be launched in Cardiff Bay this month offering visitors on a holiday in the UK the first ever chance to explore beyond the confinements of the Barrage.

Newly established Cardiff Cruises will go where no other sightseeing tour operator has gone before, past the Barrage and in to the Bristol Channel.

The 90 minute excursion will leave Europe's largest waterfront development before heading out to sea, weather permitting, past Penarth Pier and towards Flatholm Island. It will then make its return back to Mermaid’s Quay taking in the Cardiff skyline, making a trip that would make a great addition to any holiday in the UK in Wales.

With the ability to carry up to 200 passengers each trip, the ship has the largest capacity of all the tourist carriers operating from the Bay and will also be the longest, heaviest and tallest when it is launched on 7 April.

Cardiff Cruises managing director Martyn Driscoll said: “The launch of Cardiff Cruises is really exciting for us. Not only will it open up a whole new sailing experience for visitors who are usually confined to the harbour, but the ship itself, because of its size and magnitude, will become a recognised icon in the Bay.”

Mr Driscoll is the youngest passenger boat operator in the whole of the UK and experienced in running sightseeing tours having established Cardiff’s party boat company HMS69 in 2008.

Mr Driscoll said: “We always have such positive feedback from our evening cruise guests and are constantly being asked if we run a day time service. Now we have the new ship we are able to fulfil this need as well as offering something completely different to what’s already out there.”

The new sightseeing tour will be officially named at its launch on Saturday 7 April. The trip will run from April to October at 11am, 1pm and 3pm each day. For further information see www.cardiffcruises.com.