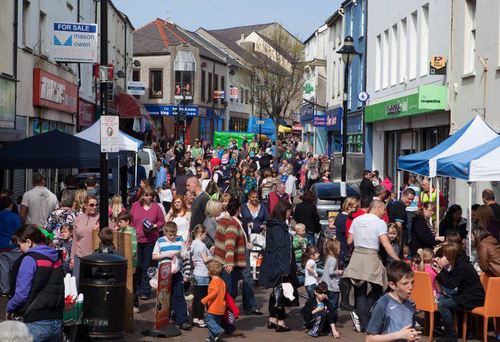 Foodies of all kinds, from locals to people on a UK family holiday, could be descending on Holyhead this spring for its first ever Ynys Cybi Food and Produce Festival.

Venue Walkway, along with Holy Island Brand, have chosen Saturday, May 5 – over the spring bank holiday – to try and entice as many people as possible to the extravaganza, which is based on the annual Food Feast held in Conwy.

A cruise liner will be docking in Holyhead on that day, while a specially commissioned steam train arrives in town, which organisers hope will bring hundreds of visitors on a UK family holidayto the area.

The festival already has over a dozen stallholders signed up and committed to the venture. Celebrity chef Dai Jones will be holding cooking demonstrations at Venue Walkway using ingredients from the stalls.

Venue Walkway general manager Carl Owen explained: “Footfall is the buzz word in retail at the moment and we’re hoping that we can maximise the opportunity of getting as many people possible here to enjoy themselves.

“We have seen that the Conwy Food Festival is a success and have been in touch with organisers there, Sunflower Events, to help us set this up. Through them we already have 13 to 14 stallholders confirmed. We have Dai Chef coming here as part of the entertainment and are looking at perhaps local groups performing. We are hoping that this festival will showcase Holyhead to another level and our hope is that we can extend to two other dates within this year.”

Mr Owen believes that holding a festival could also show big name retailers that there is life on the high street and could make it more attractive to investors.
He said: “You have to show companies that you are making an effort to try and bring people back into the town centre.