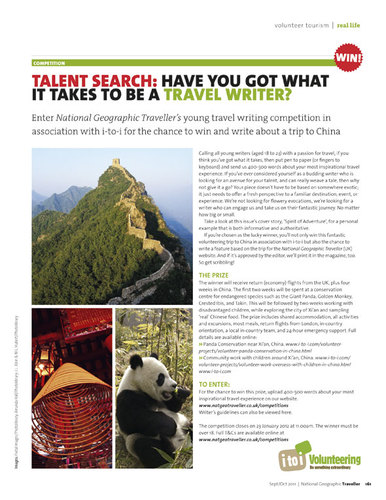 Jess’s entry particularly stood out for its drama, sense of place, and insight into an ancient custom

LONDON (20 April 2012) – National Geographic Traveller (UK) asked young travel writers if they had what it takes to be a travel writer in its inaugural Travel Writing 2012 Competition last September — and they proved they did, with the winner and runners-up now available to view online and in the May/June 2012 issue.

As a leader in inspiring narratives and informative travel features, National Geographic Traveller, in association with i-to-i, set out to find the next generation of talent.

Entrants were asked to submit 400-500 words about their most inspirational travel experience. We were soon inundated by submissions, most of which were of a very high standard — and all the more impressive considering our specified age range was from 18-23 years.

Jess Connett's piece, Tribal Tales, about the Iban people in Malaysian Borneo, pipped all the other contenders to become the winner.

Editor Pat Riddell said: “Jess’s entry particularly stood out for its drama, sense of place, and insight into an ancient custom. More importantly, it’s a compelling story that draws you in and is very succinctly focused. The structure is well balanced and the language remains descriptive without being over elaborate.”

As well as seeing her piece in print, Connett has also won a four-week trip-of-a-lifetime to China, courtesy of i-to-i.

Connett said: “I thought it was a practical joke when I got the email to say I’d won! To have a piece of writing published was one of my life ambitions – but I never thought it would happen aged 21, and especially not in a magazine with such prestige as National Geographic. It’s inspired me to keep writing and definitely to keep travelling! I’m extremely grateful, and really excited for the trip to China.”

Five runners up have also been selected and will receive a year's subscription to National Geographic Traveller. They are Lizzie Davey, Bryony Cotton, Sophie McGrath, Nathan Ferreira and Louise Pruce.

Pat Riddell added: “We’d like to thank everyone for their support of our inaugural National Geographic Traveller (UK) Travel Writing Competition 2012. We have been truly impressed by the incredibly high standard of submissions, especially considering the entrants’ wide range of ages, and we think Jess Connett is a very worthy winner.”

The winning piece and five runners-up can be viewed online at
http://natgeotraveller.co.uk/how/features/45194/

Travel Writing Competition 2012 Prizes: The winner receives an amazing four-week trip to China, thanks to i-to-i Volunteering. The first two weeks will be spent at a conservation centre for endangered species such as the giant panda, followed by two weeks’ working with disadvantaged children while exploring the city of Xi’an. The prize includes shared accommodation, all activities and excursions, most meals, return flights from London, in-country orientation, a local in-country team and 24-hour emergency support. Five runners-up will receive a year's subscription to National Geographic Traveller (UK). www.i-to-i.com

National Geographic Traveller (UK) is published under license by Absolute Publishing Ltd (APL), from the National Geographic Society in Washington, D.C. It became the 15th local-language edition when it was launched in December 2010. The magazine is also available in China, Spain, Russia, the Netherlands, Israel, Poland, Latin America, Armenia, Czech Republic, Croatia, Indonesia, Romania and South Africa. The 180-page travel and lifestyle magazine is packed full of you-are-there photography, authentic travel experiences and inspiring narratives, all focused on the brand’s theme “All Travel, All the Time.” www.natgeotraveller.co.uk

National Geographic Traveler (USA), the world’s most widely read travel magazine, was created in 1984. It championed sustainable travel before it was cool and, eight times annually, celebrates journeys that are about place, experience, culture, authenticity, living like the locals and great photography. It makes a distinction between tourism and travel and stresses inquisitive, not acquisitive, trips. It employs storytelling and outstanding photography to inspire readers to pick up and go, eschewing fashion and fluff in favour of articles that offer a strong sense of place, inspiring narratives that make readers take trips, and solid service information to help them plan those trips.