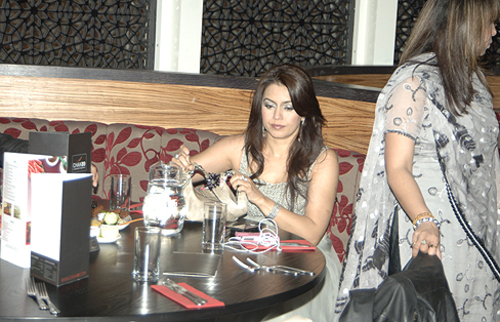 Once again Chak 89’s list of celebrity diners gets bigger; Chak 89 is “A Spice above the Rest”.

Chak 89, London’s award winning Indian Restaurant in Surrey had a super surprise when former model and Bollywood actress Mahima Chaudhary arrived with some friends to dine.

Mahima and her friends unexpectedly turned up at Chak 89 and caused a commotion amongst the diners, who surprised by the arrival of the famous Indian actress, got their mobile phones out and started taking pictures.

Mahima was heard saying to her friend “hope the food is as beautiful as the decor and ambience in here”. Well, she was not disappointed has she tucked into a mouth-watering array of traditional Indian food.

Totally relaxed, after her meal she posed for some pictures and had some banter with some of the Chak 89 staff and diners.

Mahima, who has starred in many Bollywood films alongside Bollywood heroes such as Shahrukh Khan, Salman Khan, was in London to give out an award at an event in the city, but wanted to visit Chak 89 because she had heard that Chak 89 is the place to visit for its traditional Indian cuisine and its smart and contemporary decor.

Once again Chak 89’s list of celebrity diners gets bigger; Chak 89 is “A Spice above the Rest”.