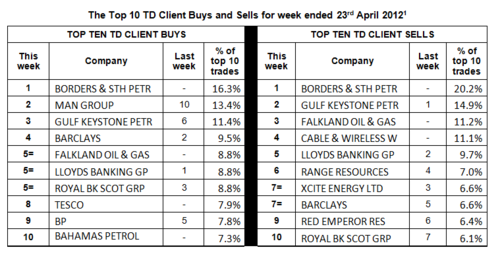 London, 25 April 2012 - Stuart Welch, CEO, TD Direct Investing comments: “Energy stocks appeared to soar to the top of TD clients’ agendas this week, overtaking Britain’s biggest banks to account for almost 60% of top ten trading overall. Borders & Southern Petroleum (BOR) was the most notable new entry, taking top spot in both tables with a buy:sell ratio of 1.3:1. There were seven new entries across our tables in total, mainly from the resources sector, while overall trading among TD clients increased by nearly 20% in the week ending Monday 23 April. The overall buy:sell ratio was almost 1.6:1 as the FTSE 100 dropped slightly to close the period at 5,665.57.

“Borders & Southern Petroleum rocketed into first place in both the buys and sells tables this week with the company’s share price spiking at 137.16p after speculation that it had made a large discovery at a well south of the Falkland Islands. However, Borders’ share price lost 32.8% from its week high, closing at 92.5p on Monday (23 April), after the company announced that it had actually found a significant volume of gas condensate rather than oil.

“It seems our clients’ took an interest in activity in the Falklands on the back of Borders’ discovery announcement, with Falkland Oil & Gas Ltd (FOGL) appearing as another new entrant to the tables this week, taking fifth and third places in the buys and sells respectively, with a 1.3:1 buy:sell ratio.

“Other new entrants this week included Tesco PLC (TSCO) at eighth in the buys after the company’s CEO announced that it is going to invest £1bn to boost its stores in the UK. Meanwhile, Cable & Wireless Worldwide PLC (CW.) was fourth in the sells, as TD clients appeared to take the opportunity to sell, following an announcement that Vodafone Group Plc (VOD) had agreed to buy the company for £1.04bn.”

The value of your investments can go down as well as up. You may not get back all the funds that you invest.

For more information clients can log on to www.tddirectinvesting.co.uk

1: The Top Ten Buys and Sells for should not be taken as a recommendation to buy or sell shares any particular bond or stock, and it is not intended to offer any form of advice. Instead it is simply an indication of the general buying and selling trends amongst some TD Direct Investing clients, observed during the period stated.

TD Direct Investing is one of the UK’s leading execution-only brokers, servicing approx 200,000 UK clients with over £3.77 billion in client assets (stocks and cash) under management.

TD Direct Investing is a subsidiary of the TD Bank Group. Headquartered in Toronto, Canada, with more than 85,000 employees in offices around the world, The Toronto-Dominion Bank and its subsidiaries are collectively known as TD Bank Group (TD). TD offers a full range of financial products and services to approximately 20.5 million customers worldwide with client assets of CDN$774 billion (as at 31 January 2012).