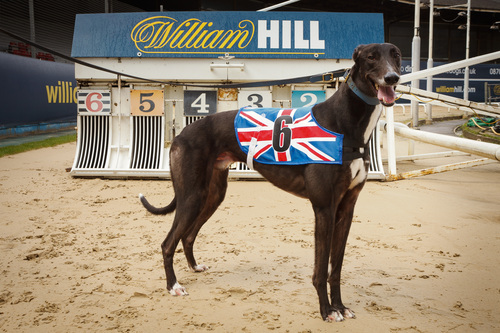 This year’s williamhill.com Greyhound Derby sees a world first as trap 6 runners wear a one-off Union Jack coat to celebrate the Olympic and Jubilee year and launch the world’s greatest greyhound race with a patriotic bang!

Following a series of discussions, The Greyhound Board of Great Britain have agreed to break a life-long tradition and allow trap 6 runners the choice to wear the bespoke Union Jack design over the standard black and white stripe with red number 6, for one night only.

The majority of Trap 6 runners, including Charlie Lister’s Eden Star and the Champagne Club syndicate’s Bubbly Phoenix have chosen to wear the coat and become part of Greyhound history on the opening night of the Derby this Friday.

Clive Feltham, Director on The Greyhound Board of Great Britain commented, “2012 is such an iconic year for Britain with the Queen’s Jubilee and the Olympics, we felt it was appropriate to relax the rules for one night to also salute our great country. And there is no better place to do this than at one of the biggest greyhound races in the world.''

Kate Miller, spokeswoman for William Hill, said: “It’s fantastic joining in with patriotic celebrations and having the first ever unique coat design agreed by The Greyhound Board of Great Britain. We hope it brings extra luck to the runners wearing our nation’s flag in the Williamhill.com Greyhound Derby!''

Exclusive televised pictures of the Derby will be shown live throughout William Hill's 2,400-strong retail estate, so tune in to see if the Union Jack wearers make it through to the next round and one step closer to scooping the whopping £125,000 winner’s purse.

But don’t be disheartened if the greyhound you’ve backed is knocked out in the first round, William Hill is repeating its second-chance offer where all bets will be refunded in the form of a free bet to reinvest again.

The offer is available across all William Hill channels - in shops, on the telephone, mobile, text and www.williamhill.com and applies to all bets placed on the Derby after 6pm on Thursday 18th April.

Selections eliminated in the first round will have their stake refunded to them in the form of a free bet – which can then be reinvested ante-post. *

**Max Stake £100, Free bet voucher must be used on the Greyhound Derby Ante Post book, valid until the first heat in the 2nd round**

William Hill
William Hill, The Home of Betting, is one of the world's leading betting and gaming companies, employing more than 15,000 people. Founded in 1934, it is now the UK's largest bookmaker with over 2,370 licensed betting offices (LBOs) that provide betting opportunities on a wide range of sporting and non-sporting events, gaming on machines and numbers-based products including lotteries.

William Hill Online is one of Europe's leading online betting and gaming businesses, providing customers with the opportunity to access William Hill's products online, through their mobile, by telephone and by text services. William Hill PLC is listed on the London Stock Exchange and generates revenues of over £1.1bn a year.

This press release was distributed by ResponseSource Press Release Wire on behalf of The Lexis Agency in the following categories: Men's Interest, Entertainment & Arts, Sport, for more information visit https://pressreleasewire.responsesource.com/about.