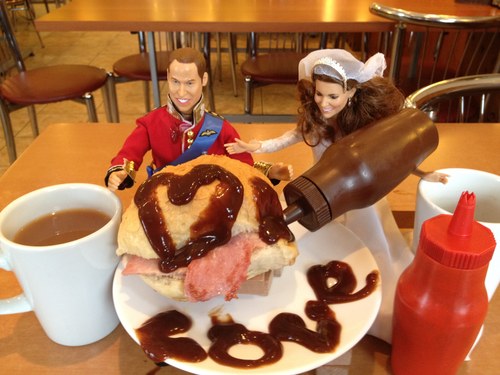 After an eventful year that has seen the young couple mark several important milestones including their first Royal overseas tour to North America, the announcement of a number of charitable patronages, Kate’s first solo public speech, as well as an addition to the family in the form of a pet cocker spaniel, Lupo, a spokesman for the Duke and Duchess of Cambridge has confirmed that they are spending the weekend of their first anniversary “privately”.

No further details have been revealed but the first wedding anniversary is traditionally known as paper and the Duke and Duchess may exchange gifts or have plans for a romantic meal.

In a year in which the spotlight is well and truly on all things British and London related, British toy company, Arklu, and photographer Duncan Raban have imagined what this weekend, the anniversary of the Wedding of the Year that attracted a global audience of hundreds of millions, might entail.

On the weekend of their first anniversary, Will and Kate are seen doing normal, everyday activities – enjoying a bacon sandwich, getting muddy at a garden centre, on a train, out for a swim, enjoying a day at the Great British Seaside, eating fish ‘n’ chips, relaxing in each other’s company and making the most of being a young couple in love - all in the very best tradition of quirky and kitsch British humour.

Photographer Duncan Raban was inspired to take the photographs having first seen them in the home of a friend whose granddaughter had bought the dolls as a gift. With his offbeat sense of mischievous humour, Duncan thought it fun to take the dolls out for a trip to a café, and as he snapped away at the dolls posed by their cups of coffee and cake, he was taken aback by the sheer enjoyment and laughter of those around him. Duncan has since taken the miniature Royal Couple out for several such daytrips.

Duncan explains the motivation behind his photos: “I love to put children's toy characters into real life human everyday situations. I guess this fun concept seems to bring out the childhood in people’s hearts and it’s been so much fun watching people enjoy this kind of theatre on the streets.”

Arklu’s Royal Wedding Dolls have been created in accordance with official guidelines laid down by Clarence House, but also have a charitable element and are ‘authentic’ in that they have been dressed and accessorised by several leading British designers. Arklu have donated £1 from the sale of every doll to the RNLI.

Only a few of the Limited Edition, individually numbered Royal Wedding Dolls remain of the original production run of 10,000. Priced at £49.95 (US$69.95) they are available at www.arklu.com and on Amazon.

The Princess Catherine Doll and Prince William Doll have been developed in line with official guidelines laid out by Clarence House. Arklu Ltd have sought and received written (email) confirmation from Clarence House to state that "we would not wish to object to the production of a doll".

Arklu Ltd is a toy development company based in London. www.arklu.com

We give permission for the following quote to be used:

RNLI (In reference to the Royal Wedding Dolls)

“We're pleased that Arklu is raising vital money for the RNLI's lifesaving work through the sale of the Princess Catherine Wedding Doll. We'd like to thank everyone that has purchased one to date and hope that the support continues. The RNLI rescues an average of 22 people a day and last year alone our lifeboats rescued 7976 people and launched a total of 8905 times. Every day the RNLI's volunteer lifeboat crew are ready to drop everything to go out to sea and help others, often in harsh weather conditions or during the hours of darkness. The money will go towards providing essential training and equipment to help RNLI volunteer crew members go on saving lives at sea.”