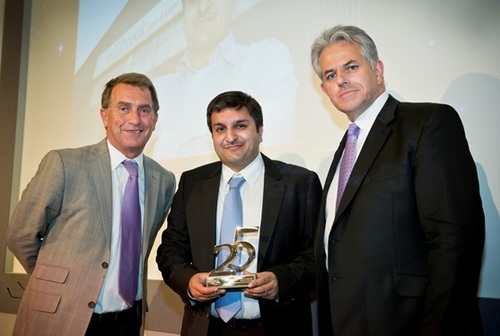 Chak 89 owners ‘Elbrook Cash and Carry’ have followed in the footsteps of Chak 89 by winning the ‘Today’s Member of the Year Award’ at the prestigious Today’s 25th Anniversary Gala Night in Stoneleigh on Monday 16th April 2012.

Elbrook Cash and Carry joined the Today’s Group in 2010 after moving from Landmark. They are delighted with this award that has arrived in such a short space of time.

Mr Frank Khalid owner and Director of Elbrook Cash and Carry and Chak 89 said; “It shows that passion and hard work can pay off in numerous ways, what better way than being recognized by Today’s and be honoured by receiving the main Award on the 25th Anniversary of Today’s success”.

Elbrook Cash and Carry who own Chak 89 the famous award winning Indian restaurant and banqueting venue in Surrey, both run their businesses to very high standards and passion that has seen both companies win many accolades within recent years, this has put them in line with the elites of companies within the same industries.

Chak 89, who was also recognized at the awards for the great work within the Asda operations had something to shout about, its owners ‘Elbrook Cash and Carry’ have kept up to Chak 89 standards and are truly as they say at Chak 89 “A Spice above the Rest”.