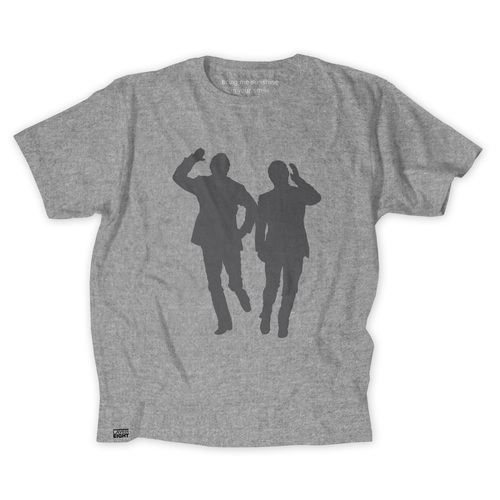 • Morecambe & Wise silhouette sunshine t-shirt features the dancing duo in full flight singing ‘Bring Me Sunshine In Your Smile’, the song that became synonymous with the legendary comedy duo, after it was adopted as their signature tune in 1969. Available in sport grey and sky blue, priced at £23.00 in size S to XXL.

• Fatty Owls t-shirt features the faulty hotel sign from the titles of the Fawlty Towers episode in 1979 entitled The Kipper & The Corpse, which saw a guest die at the hotel and Basil leaving the staff with the unpleasant task of removing the body discreetly. Available in olive, priced at £23.00 in size S to XXL

• Porridge Slade Prison t-shirt, with the slogan 'Property of HM Prison Slade' on the front, '2215' – Norman Stanley Fletcher's prison number on the sleeve and "You are an habitual criminal who accepts arrest as an occupational hazard" in the back neck. Available in charcoal grey, priced at £23.00 in size S to XXL.

• People's Front of Judea t-shirt takes inspiration from Monty Python's Life of Brian with its mock logo for the film's fictional revolutionaries. The print on the inside back neck reads: "Always look on the bright side of life". Available in army green, priced at £23.00 in size S to XXL.

All Layer Eight t-shirts are produced in the UK in a fair trade environment and all fabrics are tested to Oeko-Tex standard 100 (tested for harmful chemicals).

Based in Glossop, Derbyshire and founded in 2010 by graphic designer Jim Lockwood and his fashion designer wife Vicki, Layer Eight prides itself on producing witty, not overly branded and conceptually subtle range of t-shirts, which are designed, manufactured and hand screen-printed in the UK. Taking inspiration from comedy heroes including The Two Ronnies, Month Python, Morecambe & Wise, Tommy Cooper, Porridge, Only Fools & Horses etc...; vintage video games from pacman to space invaders; and not so athletic sporting heroes including Big Daddy.

The brand name, Layer Eight, refers to the t-shirt being the eighth layer of skin, as human skin is made up of seven distinctive layers and sub-layers.

The design duo are also behind, Sgt Smith, a fun, cool, bright, quality range of clothing for kids, featuring hand screen printed designs which can be personalised. For further information visit www.sgtsmith.com