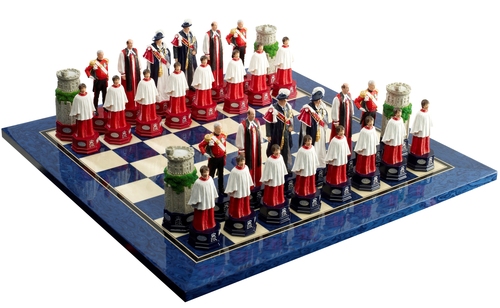 The Royal Collection, one of the largest and most important art collections in the world, including the majority of the contents of some 13 royal residences and former residences across the UK, is including Studio Anne Carlton’s Diamond Jubilee Chess Set as part of their official Diamond Jubilee collection of gifts and souvenirs, available to purchase from their online shop at www.royalcollection.org.uk

In association with St. George’s Chapel at Windsor Castle and with the approval of Buckingham Palace, quintessential British company Studio Anne Carlton has produced a unique, beautifully crafted Diamond Jubilee Chess Set to celebrate the royal milestone and wonderful historic occasion.
Studio Anne Carlton has been associated with producing traditional, hand crafted chess sets for over 40 years and the commemorative Diamond Jubilee Chess Set chess features skilfully hand painted figures including The Queen and The Duke of Edinburgh. The Rook is modelled on the famous Round Tower of Windsor Castle which dates back to the late 12th century. The pawns represent the choristers of St George’s Chapel, Windsor. Every chess piece is marked with The Queen’s Cypher and each set includes a Parchment Certificate.

Studio Anne Carlton’s managing director, Michael Lee, said; “Studio Anne Carlton is honoured to have our Diamond Jubilee Chess Set included as part of The Royal Collection official merchandise to celebrate HM The Queen’s Diamond Jubilee. The chess set appeals not just to chess players but to all those people around the world who acknowledge the British Royal Family and wish to own and enjoy a delightful and useable piece of collectable memorabilia.”
Studio Anne Carlton has also produced the figures of HM The Queen and the Duke of Edinburgh as individual collectable pieces, available in a commemorative gift box and both the chess set and the figurines are available to purchase directly from the Studio Anne Carlton web site www.sac-games.com and leading retailers including Harrods, Hamleys and Fortnum & Mason and Cool Britannia.
(ends)


Studio Anne Carlton has spearheaded the design, production and marketing of chess sets and classic games since 1969. The SAC collection showcases the world’s leading brand of decorative chess sets, spanning subjects from Isle of Lewis to Battle of Hastings and from Lord of the Rings to Peter Rabbit. SAC offers one of the most comprehensive ranges of classic games on the market today including chess, backgammon, compendiums, dominoes and roulette. These products make the perfect gift, both for the traditional games enthusiast and for the person who just likes to play with friends at Christmas.