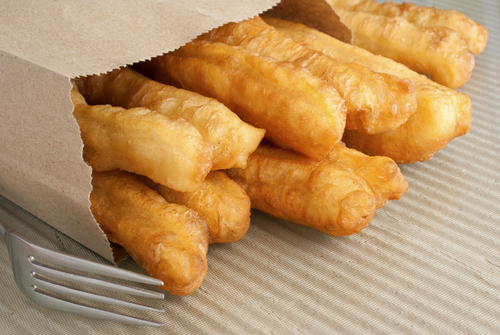 Wing Yip is helping to dispel the myth that vegetarian breakfasts can never match the meat alternative with some incredible pan-Asian dishes.

To celebrate National Vegetarian Week (NVW) 2012, the leading Chinese and Oriental food supplier is highlighting delicious meals to challenge the might of the bacon butty and black pudding.

The focus of this year’s National Vegetarian Week, which runs from Monday 21 May to Sunday 27 May, is breakfast, so veggies can try Yu Tiao, usually known in English as Chinese fried bread sticks.

The long, golden-brown, deep-fried strip of dough is eaten for breakfast in East and South East Asian cuisines and often dipped into hot coffee for a hearty and satisfying first meal of the day. Cooking from scratch is reasonably hassle-free, but for those short on time, Wing Yip offers a quick and delicious frozen version.

Other vegetarian breakfast choices include the Malaysian Paratha, which is a type of flatbread that’s delicious with breakfast staples like omelette or scrambled eggs. Finally, Chinese Man Tao (steamed buns) are fluffy and perfect with hot soy milk.

Mr Wing Yip, founder of Wing Yip, said: “We’re trying to help break the perception that vegetarian breakfasts are a bland alternative to the traditional British fry-up or sausage sandwich.

“With a little imagination, you can create a fantastic meat-free exotic meal to surprise your breakfast guests and get a perfect start to the day.”

Ingredients:
• ¾ teaspoon instant yeast
• Two tablespoons of lukewarm water
• One teaspoon of Mai Siam Palm Sugar
• 250 ml water
• One teaspoon of bi-carbonate of soda
• ½ teaspoon of ammonia powder - available from Wing Yip
• ½ teaspoon of alum - available from Wing Yip
• 315 gms bread flour
• One teaspoon pink salt
Method:
1. Mix the yeast, lukewarm water and sugar and set aside for 10 minutes until foamy.
2. Mix the water, bi-carbonate of soda, ammonia powder and alum.
3. Sift the bread flour and pink salt into a mixing bowl then add the two other mixtures and, using a wooden spoon, mix the dough until it is combined.
4. Knead for five minutes and add a little bit more flour if the dough is too sticky to work with.
5. Cover with cling wrap and let the dough proof for two hours. After that, turn the dough onto a well-floured work surface.
6. Sprinkle some flour on the dough and roll it into a long rectangle.
7. Cut into strips that are four centimetres-wide and roughly the length of a chopstick.
8. Place one of the strips one on top of another and leave for five minutes. Then heat vegetable or sesame oil for frying.
9. Press lightly on the two strips of dough with a chopstick. Then hold both ends of the combined dough and lower into hot oil. Deep fry, turning constantly until each it turns puffy and golden brown.

Please contact the Wing Yip press office if you are interested in finding out more about:
• The history of the UK’s leading Oriental grocer
• Wing Yip stores and products
• Product sampling
• Chinese and pan-Asian vegetarian recipes
• Traditional recipe ideas
• Banqueting on a budget

• In 1970 Wing Yip and his brother Sammy opened their first specialist Chinese grocer in the heartland of Birmingham to supply Chinese products to local Chinese families, restaurants and takeaways

• Wing Yip imports directly from the Far East, with each store stocking more than 3,000 authentic Chinese foods and products

• In 2008 Mr Wing Yip was awarded an Honorary Doctorate from Birmingham City University.