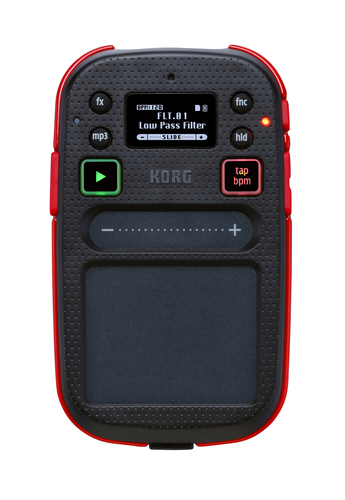 Iconic electronic instrument brand KORG today announces the launch of the mini KAOSS PAD 2, a handheld effects unit that enables users to put a personal spin on their favourite tracks, whether on stage, in the studio or out on the street.

The launch of the mini KAOSS PAD 2 (RRP £155.99) heralds the beginning of a new era for music fans who, instead of simply listening to music on the move, can now reshape tracks into awesome-sounding DJ-style performances.

As well as being a must-have for diehard DJs – confirmed KORG fans include Calvin Harris and Zane Lowe – this go-anywhere device puts powerful technology into the hands of anyone who wants to mix up their music collection without needing stacks of turntables and hidden trickery. The mini KAOSS PAD 2 offers intuitive control and instant creativity for newcomers and professionals alike.

Building on the runaway success of the original mini KAOSS PAD, this crowd-pleaser incorporates cool new effects from its bigger brothers, the KAOSS PAD and KAOSS PAD QUAD. Not only can external music sources such as iPods or even guitars be fed directly into this dynamic effects processor, but the mini KAOSS PAD 2 also boasts a built-in MP3 player and microSD card slot for playback, storage and exchange.

The slider in the centre of the unit provides immediate access to 100 effect programs, including vinyl break, loopers, filters, delays and reverb. These are controlled in real-time by stroking and tapping the touchpad, which opens up an extraordinary array of sound-warping possibilities.

The device rewards endless experimentation and exploration, with added features such as ‘hold’ which memorises a previous position; instant recall for favourite effects; BPM detection for seamless synchronisation, ‘FX release’ which gives the effect a natural fade-out and performance recording facility.

To make yourself heard, there’s a built-in speaker, a jack for external output into amps or a headphone socket for private enjoyment. Its Organic Electro Luminescent (OEL) screen means high visibility whether using the mini KAOSS PAD 2 in a club or bedroom, train or ‘plane.

The mini KAOSS PAD 2 is the latest addition to the KORG family of electronic instruments, used by an array of music industry professionals around the world and now available to people who want to make their own music quickly and easily, whether at home or on the move.

KORG was established in Japan in 1962 and is famed for creating the world’s best-selling synthesizer.
Its iconic range includes some of the world’s greatest synthesizers, digital pianos, drum machines, samplers, effects units, workstations, mini keyboards, guitar tuners and metronomes. Popular with professional musicians such as Damon Albarn and Calvin Harris, KORG is bringing its products to a wider audience of tech-savvy consumers. As part of this initiative, a number of iPhone and iPad apps have recently been launched to recreate the sounds of classic devices including the Electribe, MS-20 and Kaossilator.