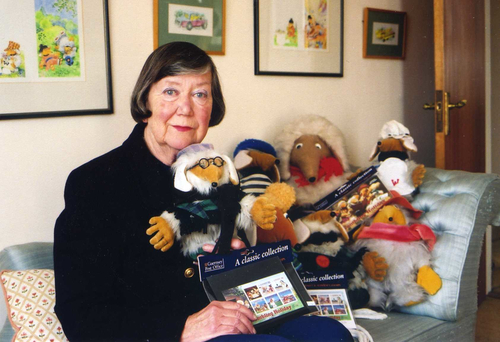 They were the furry eco-warriors who were years ahead of their time.
And now the Wombles are going on display in the world’s first exhibition using their creator’s personal collection, on the tiny island Elisabeth Beresford made her home.

It’s a far cry from Wimbledon Common, where the Wombles made good use of the things that everyday folk left behind, but Orinoco, Uncle Bulgaria and the gang will pitch up in the Channel Island of Alderney for the summer-long exhibition.
The Wombles; Elisabeth Beresford and her Alderney will celebrate the author’s life, her most famous characters and other works, and her special connection with the island.

A selection of Beresford’s personal Womble memorabilia including best-selling books, films and soft toys will feature, while a smaller, permanent museum on the island where she lived for 50 years is planned for next year.

Beresford’s daughter Kate said her mother’s love for Alderney ran very deep.
“She always loved it and found it the perfect place to inspire her writing,” she added.

“She even created a Womble in honour of the island who was aptly named Alderney. My brother Marcus and I are delighted that the exhibition is taking place, and we have loaned many of her original books, photos and personal items such as mother’s typewriter and desk, for the exhibition.”

Exhibition organiser Donald Hughes said Liza, as the author was known locally, “completely immersed herself into the community and was a much loved character”.
“She really got involved with things and her life on the island will be remembered through photographs and anecdotes illustrating her involvement in the locally made film Rosebud, the Alderney theatre group, the Alderney Railway Society and as a former member of the island’s Government.
“This really is an exciting project to be involved in.”

The exhibition will officially open on Saturday, June 30 and will run throughout the summer until the end of September. www.visitalderney.com

This press release was distributed by ResponseSource Press Release Wire on behalf of Black Vanilla / To The End Media in the following categories: Children & Teenagers, Entertainment & Arts, Travel, for more information visit https://pressreleasewire.responsesource.com/about.