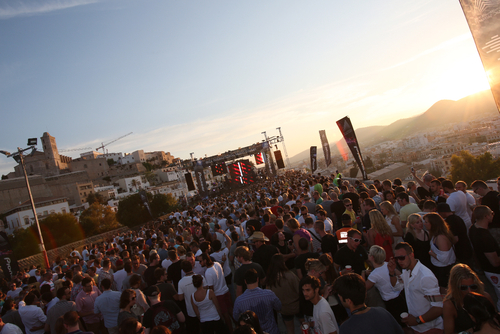 Having been a supporting partner of the summit since its inception in 2008, Pioneer is synonymous with IMS

31st May 2012, Ibiza: Pioneer’s position at the heart of the dance music industry has been reaffirmed with this year’s International Music Summit (IMS) Grand Finale Festival in Ibiza’s picturesque old town.

As the only contemporary music event to be held within the Dalt Vila UNESCO World Heritage site, the IMS Grand Finale Festival is a truly momentous occasion. It officially marks the end of IMS and the opening of Ibiza’s world-famous clubbing season.

This year DJ E.A.S.E., of Nightmares On Wax, kicked off proceedings as the setting sun bathed the Balearic island in a golden glow. Performances from Disclosure, Seth Troxler, Loco Dice, Azari & III and Carl Cox took the energised audience into the night. The crowd then headed over to Ibiza’s iconic Pacha nightclub, where Pete Tong and Calvin Harris raised the roof until the small hours.

The previous evening had seen David Guetta, Paul Oakenfold, Diplo, MINX and Goldfish take to the stage at Dalt Vila as enthusiastic fans lapped up the atmosphere against the stunning backdrop of the Ibizan harbour.

Now in its fifth year, the three-day IMS is one of the dance music industry’s most influential events. This year’s summit featured keynote speeches from internet giants such as Google, YouTube, Spotify and Twitter and interviews with legendary producers Giorgio Moroder and Nile Rodgers. Along with their performances at Dalt Vila, DJs Carl Cox, Diplo, Goldfish, Luciano, Paul Oakenfold and IMS co-founder Pete Tong also contributed to the event’s panel discussions.

As well as playing host to some of the biggest parties of Ibiza’s clubbing season, IMS also attracts the most influential decision makers on the electronic music scene, including representatives from record labels, performing rights societies, venture capitalists and worldwide brands such as Coca-Cola, Puma and Nokia.

Outside of the summit’s official debates, one thing being discussed by attendees was Pioneer’s RMX-1000, which combines all the creative possibilities of software with the crowd-pleasing display that only hardware allows. The innovative remix unit has arguably become the most sought-after piece of DJ equipment on the scene since its launch at the Winter Music Conference in Miami earlier this year.

Having been a supporting partner of the summit since its inception in 2008, Pioneer is synonymous with IMS . Mark Grotefeld, General Manager, Pioneer Europe, explains the influence IMS’s collaboration with Pioneer has had on the dance music scene.

‘When IMS’s founding fathers approached us with the concept, we immediately saw its industry potential,’ Grotefeld said.

‘The electronic music industry has evolved in many exciting and dynamic ways over the last five years. We have witnessed significant change in music distribution, streaming, technical developments in hardware and software, smart apps, production and consumption habits. And IMS has been there to help us chronicle, debate, measure and make sense of all these changes.’

IMS co-founder DJ Pete Tong said that the event is an invaluable opportunity to discuss the issues facing the industry and bring its biggest players together in Ibiza, where so many DJs’ careers have kick-started.

‘We started IMS five years ago, during a period of uncertainty for our business. But the support of long-term sponsors such as Pioneer has ensured the continued success of both IMS and the dance music industry as a whole. Ibiza is not only home to IMS but is also the place where a new chapter has been written. It’s important to recognise that David Guetta’s meteoric rise, for example, just couldn’t have happened without Ibiza and his residency at Pacha,’ Tong said.

Pioneer Europe NV is the regional European headquarters of the Pioneer Corporation, a global leader in electronics and audio/video products for the home, car, commerce and industry, particularly in the following core multimedia technologies: digital versatile disc (DVD), in-car navigation and AV systems. Its shares are traded on the Tokyo Stock Exchange.

For all media enquiries, please contact Pioneer within your country:
www.pioneer.eu/eur/content/company/company/locations.html

Press images can be downloaded from www.prosvlink.net with press password prodj321.