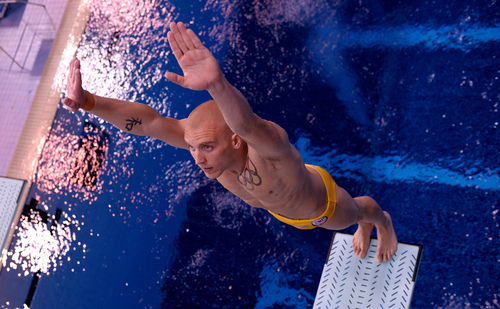 With an average of 400 accidental deaths from drowning each year more needs to be done to raise awareness of how to be safe in, on and near water

Nick, who became a lifesaver when he rescued fellow diver Monique Gladding from the water at a World Cup meeting in Russia last year, is spearheading the campaign by the Royal Lifesaving Society UK (RLSS UK).

The official launch of Water Safety Awareness Week, (which takes place June 16 to 24), comes following a weekend in which five people drowned at sites across the UK.

Nick, aged 24, who is competing at London’s 2012 Games, said: “Every drowning is a tragedy. With an average of 400 accidental deaths from drowning each year more needs to be done to raise awareness of how to be safe in, on and near water.

“I hope that this campaign can help to educate people about the potential dangers. This isn’t about telling people to stay away from water, but about knowing how to enjoy water safely, understand the risks and what to do in the event of a problem."

"Last weekend’s tragic events are unfortunately all too common and with some understanding of water safety issues they can be prevented.”

“I had a real wake-up shock when I had to rescue Monique last year. You never think that you’ll need to save someone in the water, and the truth is that I didn’t have a clue what to do, adrenaline took over, and luckily it turned out ok."

“Now I’d like to do whatever I can to convince people to become more aware that accidents in the water do happen and we should all know what to do if the worst does happen.”

Key safety tips being promoted during Water Safety Awareness Week include understanding beach flags and signs, taking time to check tide times and ensuring that you won’t be cut off when the tide comes in. At inland water sites, they include only swimming at lifeguarded lakes and always wearing a buoyancy aid when on the water.

Di Standley, chief executive of RLSS UK, said: “As a charity our aim is to prevent unnecessary deaths and injuries from drowning. As well as training and teaching lifeguarding skills, we want to do this by helping people to understand the risks associated with water, and know how to enjoy it safely."

“It is a sad fact that the onset of summer brings an increase in drowning as more people spend time near or on water. In hotter weather people start to take part in activities they wouldn’t usually do. We hope that, with Nick’s support, we can make greater inroads into reducing drowning figures across the UK and Ireland and help everyone to enjoy a safer summer.”

For more details on drowning statistics, information and a drowning case study, please go to
the campaign media pack

A photo of Nick with Monique is available upon request