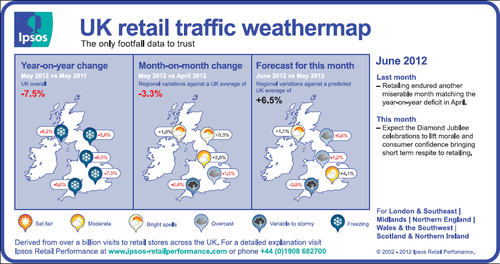 The latest results from the Retail Traffic Index (RTI), which monitors the volume of shoppers in non-food stores across the UK, recorded yet more footfall lows in May, with shopper numbers down by 7.5% against May last year, and down 3.3% on April this year.

Compiled by Ipsos Retail Performance, the Index continues to reflect a sorry state of affairs for high street shopping in the UK. The results for the economy during Q1 have been revised downwards and consumer confidence is now running at its lowest ebb since December. The run rate of the RTI for the year to date is 6.2% down on 2011, making the slowdown 2/3rds more than last year as a whole.

Dr Tim Denison, Head of Retail Intelligence at Ipsos Retail Performance, said: “In May last year, the UK was enjoying a mini-bounce in confidence on the back of the royal wedding, so the comparative is a strong one this month. However, overall the health of retailing is continuing on its downward trajectory and even the weather has continued to conspire against retailers.”

Over the Spring Bank Holiday week, however, the footfall deficit against last year was less severe, down by only 2.9% on the equivalent bank holiday week of 2011.

“This provides a glimmer of hope that, at certain times, and beyond everyday routine, people are still prepared to go out shopping in force,” comments Denison. This was most apparent in the North of England when footfall over the bank holiday week was only 0.3% down on last year.

With the weather offering signs of improvement, and many people adding extra days of holiday to the two bank holidays next week, footfall in high street stores is expected to rise, albeit temporarily. If the impact of last year's royal wedding is anything to judge the potential influence of The Queen’s Diamond Jubilee, high street retailers can hope for a three week run where shopper numbers may well match last year's across the UK as a whole, and some in parts of the country may exceed them.

“After the bank holiday week and Jubilee celebrations, high street retailers will be pinning their hopes on sporting events such as the Games and Euro 2012 football tournament,” says Denison. “If these can help to lift the nation’s spirits, then shopper numbers could be swelled. If this happens, high street retailing in the UK will be in a far better position in a couple of months than it is right now.”

Visit www.ipsos.com to learn more about Ipsos’ offerings and capabilities.

More information on Ipsos Retail Performance can be found at www.ipsos-retailperformance.com