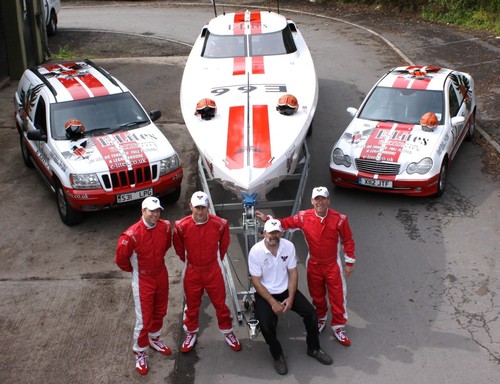 The postponement of this year’s historic RB12 endurance race was not enough to stop a defiant team of powerboat racers from hatching plans to circumnavigate Great Britain in a bid to raise thousands for children’s hospices.

Refusing to let the RB12 disappointment sink their aspirations, a patriotic partnership between BananaShark Racing and E-Lites electronic cigarettes resolved to complete the 2,000-mile Round Britain circuit in an ambitious 11-day charity challenge of their own.

Setting off from the harbour of Salcombe, in Devon, on 21st June, the crew will race clockwise around Britain, visiting 10 coastal towns and cities to hand over money to local Rotary Club representatives for distribution to children’s hospices.

The phoenix-style Round Britain Charity Challenge 2012 will visit Newlyn in Cornwall, Swansea, the Isle of Man, Troon, Inverness, Edinburgh, Grimsby, London’s Chatham Historic Docks and Portsmouth, before returning to Salcombe on 1st July.

A crew of three experienced drivers and navigators – including championship winners John Cooke, Graham Lawton and Jeremy Gibson – will guide the 38ft BananaShark Stirling powerboat around the route, covering distances of up to 230 nautical miles per day, which will mean several hours spent battling often difficult conditions and high waves.

The £3,500 entry fee returned from RB12 will be redistributed between the 10 rotary clubs, but the crew hope to at least double that amount with additional fundraising activities and auctioning of powerboat rides en route.

Anyone wishing to bid for a seat in the boat on one of the available legs should click here for details.

In addition, headline sponsor E-Lites hopes to educate smokers around the country about its leading range of electronic cigarettes, which offer a healthier, use-anywhere, smoke-free alternative to conventional tobacco cigarettes.

To underline this ‘clean air’ message, the team has ensured carbon neutral status for its powerboat, with highly efficient Yanmar BY260 engines that will drive the craft despite a capacity of only three litres each.

The Round Britain Charity Challenge, supported by Raymarine navigation technology, will be covered online by a GPS tracking system that will chart the crew’s progress in real time, while video specialist Veho is supplying cameras that will film the action for viewing via websites and social media.

BananaShark director and co-driver John Cooke said: “Following the postponement of the Round Britain race we were incredibly disappointed but thanks to the co-operation of E-Lites and our other sponsors we will not only complete the challenge but also make a difference in the local communities.

E-Lites co-founder and director Adrian Everett said: “Our participation in RB12 was always a major undertaking, and now that we’re embarking on this journey alone the challenges are even greater in terms of logistics and planning. Neither should we underestimate the physical and mental challenges that the crew will face on their way round. Fortunately, we have assembled a fantastic team and feel very excited about completing this challenge, not for our own sake but for the thousands of children who will benefit from the money we’re hoping to raise. Overall, it seems fitting that we’re embarking on the E-Lites Round Britain Charity Challenge in the month of the Queen’s Diamond Jubilee, which has proven to be a tribute to the British spirit and highlights the power of community partnerships.”

A map of the full route can be viewed by clicking here .

To follow the progress of the Round Britain Charity Challenge as it happens, go to www.bananasharkracing.co.uk

Kevin Stephens and John Cooke have been building boats since 1999 and formed BananaShark Ltd in 2003. What has followed is nothing short of incredible with a total of nine British Championships and two speed records. Performance is paramount. The current model, the Stirling 34, is built entirely at the company’s factory in Devon and, with the help of electronics sponsor Raymarine and engines by Yanmar, is not only one of the most technically advanced in terms of technology but also boasts a cutting-edge hull design. For more information, visit www.bananasharkracing.com

E-Lites was established in the UK in 2007 and is already a leader in its field, producing some of the most advanced electronic cigarettes on the market. The company is expanding nationally and internationally as demand grows for its innovative products. E-Lites’ revolutionary products are the result of extensive UK research and development. The evolution of E-Lites has been supported by significant investment in design and testing to ensure its electronic smoking devices are made to the highest standards and deliver the most authentic and luxurious smoking sensation possible. The company’s manufacturing facility uses the latest state of the art micro-electronic technology, ensuring E-Lites set the standard within the electronic smoking industry. E-Lites is a keen supporter of specialist sports and sponsors a number of individuals and teams in the UK and abroad.

About the Stirling 34 Powerboat

Raymarine is proud to specialise in marine electronics; this focus ensures it offers equipment that combines industry-leading technology with intuitive robust design, ideally suited to withstand the range of marine conditions that would spell disaster to lesser electronic ranges. Raymarine's world-class test facilities put products through their paces. We shake, bake, freeze and flood products and components to their limit so buyers don't have to find out what those limits are the hard way. Test boat 'Raymariner' and dedicated teams of testers around the world spend thousands of hours at sea to ensure that Raymarine products achieve the high standards set for them and expected by customers. Visit www.raymarine.co.uk

Veho was founded in 2006 in the UK with ambitions to create a fresh and energetic consumer electronics brand. Today, with five global offices and sales distribution in more than 100 countries, Veho is fast becoming a household name for electronics and technology worldwide. Veho does things differently. The company manufactures products that make a statement and stand out from the crowd. Boring is bad and run-of-the-mill is not in Veho’s dictionary. All products are manufactured to the highest standards and conform to worldwide safety regulations. For more information about Veho’s diverse and innovative product range, visit www.veho-uk.com .