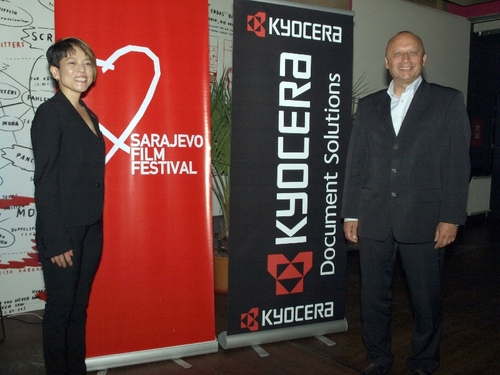 The event was held at the Meeting Point Café & Cinema in Sarajevo and was hosted by Kyocera Document Solution's regional representative in Bosnia and Herzegovina, Xenon Forte. It was attended by an invited celebrity audience and was followed by the Festival's Premiere Showing of the Japanese film Okuribito (Departures) directed by Yojiro Takita. Okuribito won the Academy Award for Best Foreign Language Movie at the 81st Oscars in 2009 and the Japan Academy Prize for Picture of the Year at the 32nd Japan Academy Awards.

The Director of Sarajevo Film Festival, Mr. Mirsad Purivatra, stated: “It is a great pleasure for us that Kyocera Document Solutions – the hi-tech company from Japan, has joined our Festival in Sarajevo as a Gold Sponsor. We are pleased that one cultural event is recognised as a communication channel and that the corporation chose this way to improve its brand awareness.”

The Sarajevo Film Festival is the largest film festival in the Balkans and one of the largest in Europe. It was founded during the siege of Sarajevo in 1995 and every year attracts international and local celebrities to the City. This year’s Festival will show more than 220 movies and expects some 100.000 visitors, of which 2.500 are accredited guests.

In 1995, after the 4-year-long siege of Sarajevo, the Sarajevo Film Festival was founded to recreate civil society within the City. Today, the Sarajevo Film Festival represents the main meeting place for all regional producers and authors and is recognised by film experts from all over the world. The Festival offers significant networking opportunities for film professionals and educates the industry on what the facilities and talent this region has to offer.