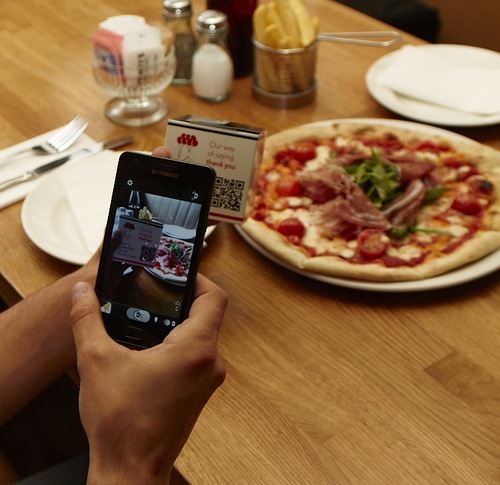 QR has really come of age in 2012, helped by the increasing ubiquity of smartphones and consumer willingness to scan and engage with QR Codes

LONDON, UK (13 June, 2012) – A group of nine restaurants, bars and hotels in London, including Ponti’s Italian Kitchen, specialists in food from Emilia Romagna, will be the world’s first businesses to use SmartBox, a new interactive table talker that uses QR Codes to improve CRM while allowing customers to enter competitions, take part in loyalty schemes and much more.

SmartBox is a new product made by zappit; the NFC, QR and mobile payment technology firm. Branded to match the venue it is in, SmartBox sits on a restaurant table top or in a hotel room working as a data capture device that enables tailored communication with customers and drives transactions. A customer simply scans the QR Code on SmartBox and is taken to a mobile website that features a loyalty scheme, information about forthcoming promotions and competitions.

Ponti’s Italian Kitchen is trialling SmartBox in two of its West End restaurants on Duke Street and Oxford Circus, which see on average 1,000 customers every day.

“We are excited to be the launch partner of SmartBox”, said Jennifer Payne, Marketing Manager, Ponti’s Group. “With its assistance, we are looking to further expand our CRM database, social following, acquisitions and customer feedback responses; whilst capitalising on the huge loyalty we’ve cultivated with our Grazie Loyalty Scheme. We've worked closely with the zappit team in the run up to the launch, using QR code technology and mobile engagement to fully realise SmartBox's potential. As part of our commitment to this campaign our staff will be on hand to assist customers and advise on how best to interact with QR codes and the benefits of doing so.”

With Ofcom research revealing that more than half of adults use their smartphones and around a quarter (23%) use them during mealtimes, zappit is launching the SmartBox to be used by bars, restaurants, cafes and hotels of all sizes. zappit Founder and CEO Mark Fraser believes that the rise in smartphones use means SmartBox is the perfect engagement tool and a great way for smaller businesses to get to grips with mobile marketing technologies:

“QR has really come of age in 2012, helped by the increasing ubiquity of smartphones and consumer willingness to scan and engage with QR Codes”, said Mark Fraser, CEO and founder, zappit. “Many SMEs might not be familiar with mobile marketing technologies but SmartBox is a highly cost-effective solution as well as being a wonderful way for smaller restaurants and hotels to engage immediately with customers and improve CRM.”

As part of the SmartBox offering, zappit helps with the creation and management of campaigns, QR Code generation for SmartBox and the creation of bespoke mobile experiences for venues. zappit also provides post-experience engagement emails and the real-time monitoring of engagement activity, so SmartBox customers can track how many people are engaging and how they are following up.

“QR has such potential but many brands have got the basics drastically wrong,” said Mark Fraser. “Sending a customer to a desktop website is going to turn people off immediately and providing a compelling experience on a mobile website is critical to the take-up of QR Codes as a marketing tool - SmartBox does this for all customers.”

The other participants in the four-week trial are Kaifeng in Hendon, The Raglan in Muswell Hill, the Blue Legume restaurants in Islington and Crouch End and The Flask pub and La Gaffe restaurant and hotel in Hampstead.

zappit’s NFC and QR Code proposition has recently won the interest of high profile brands like Natwest, Morrisons and Mercedes Benz. zappit has also recently completed a city-wide QR and NFC trial with JCDecaux in Reading – the first of its kind in Europe.