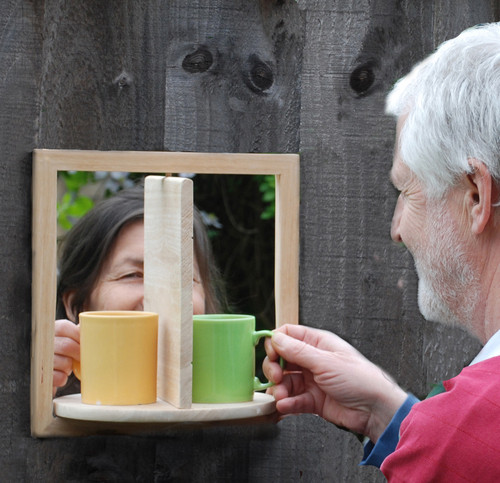 Student design competition, “Designing for the Future”, stepped up a gear this year with winners being offered a mentoring package in addition to a cash prize.

“Designing for the Future” run by The Future Perfect Company in conjunction with the University of Brighton is now in its third year and encourages student designers to think about the challenges and issues affecting our ageing population – and to create innovative and attractive designs which allow older people to continue to live enjoyable, active and independent lives.

Founder of The Future Perfect Company, Philippa Aldrich explains : “The Designing for the Future” competition has come a long way since we started it three years ago. Begun as a brief for one small group of students within the Faculty of Arts at the University of Brighton, the Competition has steadily gained recognition as a touch point for discussion about design for our ageing population, whether at the Age UK national policy conference, the BSRA Science of Ageing conference or the Mobility Roadshow.

As the Competition has grown, I have become increasingly aware that in order to create and sustain an innovation pipeline for this area of design, the students would benefit from a mentoring approach to help them develop their projects and also launch themselves into the design world after graduation The mentoring package will consist of product development advice from designer Richard Child who is currently bringing his own unique crutches design to market and I will be adding business support, drawing particularly on my experience of using social media to launch and build The Future Perfect Company”.

Comments judge Richard Child: "The "Designing for the Future" competition has been an excellent showcase of young British design talent and I’ve been very impressed with the standard that was set by the students at the University of Brighton. Each student applied their design intuition to real world problems, relating to our ageing population, requiring nothing less than professional results. I look forward to seeing how the students progress during their time at Brighton.”

Says Anne Boddington, Dean of Faculty of Arts at the University of Brighton : “This Competition and Philippa’s commitment have provided us with an important nudge to think differently about some of the most important immediate and future challenges. Our students have produced some very thoughtful sophisticated and high quality work.”

Winner Xenia Moseley took inspiration from her own family history to design a Family Tree card game which allows people to discover and remember the person behind the name.

Runner up, Florence Pike was horrified by her research that suggested that as many as one million people over the age of 65 say they are often or always lonely. Finding that neighbours in particular can play a crucial role in providing a source of companionship for the elderly, Florence’s products “Tea for Two” and “The Swivel Hatch” transform the garden fence from a barrier to a meeting point by creating an ad hoc tea tray.

The competition received entries from two year groups of Product Design and 3D Design students at the University of Brighton and was coordinated by tutor Gareth Neal and judged by Anne Boddington, Dean of the Faculty of Arts at the University of Brighton; Philippa Aldrich, founder of The Future Perfect Company; Gretel Jones, senior consumer markets policy adviser at Age UK; and Richard Child, Technical Director of Hymid R&D.

Other entries included a memory decanter which uses QR codes to access family photographs, an eccentric carrier which incorporates a gyroscope into a playful carrying tray, a face recognition device for people suffering from prosopagnosia (faceblindness), a coffee table which incorporates a foot massager and a lap garden for the bedbound.

The Future Perfect Company (www.thefutureperfectcompany.com) was born when owner Philippa Aldrich was looking for ways to make life a little easier for relatives and friends facing the challenges of later life. When investigating what products could and should be available to help the over 50s, she was horrified by the many dull, utilitarian products which looked as if they belonged in a hospital. In time, Philippa became increasingly determined to champion the need for thoughtful design so she took the plunge and – after 20 years as a city lawyer – made her passion a reality in 2009 when she established The Future Perfect Company.

The Future Perfect Company is an online destination for older people and their carers to find beautifully designed products to help them live a better life. The company aims to offer alternatives to the utilitarian and uninspiring products available to older people and to generate debate around issues affecting older people as a catalyst for change.

The “Designing for the Future” competition with the University of Brighton is now in its third year and has been showcased at the Mobility Roadshow, the international BSRA Science of Ageing Conference and a public expo. Philippa has spoken about the challenges of the UK’s ageing demographic at Age UK’s annual policy conference, collaborated with the Technology Strategy Board’s Tomorrow Together initiative and is judging the Royal Society of Arts (RSA) student design awards. Philippa was recently invited to become a RSA fellow.