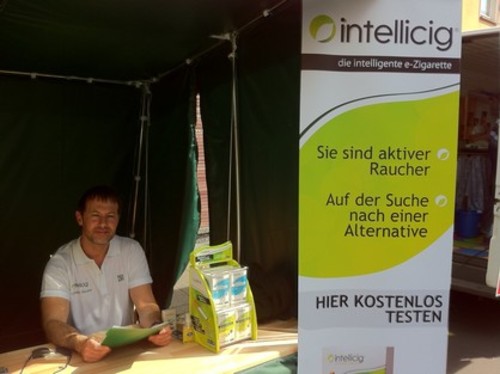 With some 2 million users of e-cigarettes in Germany already – according to a recent article by e-cig enthusiast Professor Dr.Jürgen Ruhlmann, Medical Director of the prestigious MedizinCenter in Bonn, which specialises in nuclear medicine, radiology and radiation therapy (and currently featured on Intellicig’s German website) – it was no real surprise that the Intellicig stand at the ‘Fountain Festival’ was a raging success ...despite the weather.

The Brunnenfestof Oberurselis an incredibly popular folk festival in Germany’s Taunus region which draws huge crowds eager to enjoy the attractions of the four day festival (June 1st-4th). These included a large amusement park, a brilliant fireworks display, live music and dancing. A ten-kilometrerace and a craft market attractedsignificant numbers of weekend visitors as well as the traditional water-based attractions of Oberursel – known locally as the ‘Fountain City’.The Brunnefest was also an ideal event at which to promote Intellicig.

There’s clearly an appetite for electronic cigarettes in Germany. Intellicig Deutschland is always keen to meet the German public face-to-face to inform them of the particular benefits offered by the Intellicig range. Intellicig’s ‘Quality designed in Great Britain’ is a reassuring feature in a market of often questionable quality. With many products coming in from outside the EU which barely meet minimum German Trading Standards requirements, the fact that Intellicig is the the world's first e-cigarette manufactured to the same exacting EU regulatory standard as a pharmaceutical product is of great interest.

Intellicig Deutschland’s Guy Eaton (pictured) said:
“We had four days of intense discussion and consultation with visitors throughout the festival. We also made some real sales, even though the weather only ‘played nice’ for two days before turning rainy and stormy. At one point we were in danger of being blown away along with our brochures!

Despite the wind and the rain we experienced genuine interest. People wanted to be reassured about fears that the e-cigarette may be dangerous.They clearly liked the professional advice and the ‘quality and purity approach’ of Intellicig, as well as the chance to try the product themselves.”

Intellicig Deutschland’s Henning Dransfeld said:
“We had quite a few people who bought a starter kit in the first or second day, then come back afterwards to order more and to tell us that they have not smoked since. Some were very grateful!

It’s particularly nice when you are just advising someone and a customer from the day before comes around to tell them ‘this is great, go for it!’ We also won back a couple of people who bought cheap e-cigarettes without consulting in a news agent and got disappointed. Intellicig changed their minds.”