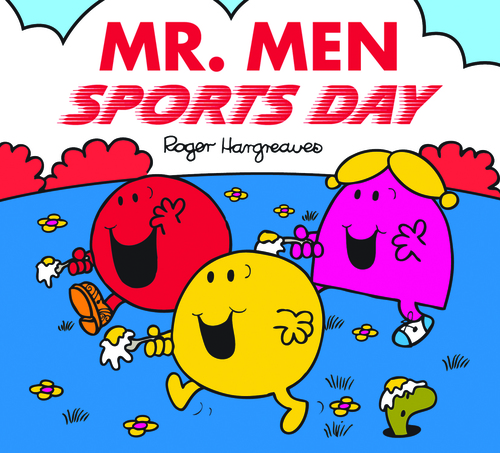 27th June, 2012 – As Britain limbers up for a summer of sport, new research into the timeless tradition of sports day has provided a glimpse into what UK mums’ fantasy school sports day would look like.

According to the research conducted by Egmont UK for the launch of their Mr. Men sports day books, in mums’ ultimate sports day, comedians, royalty and pop stars would triumph over medal winning athletes. When asked to choose their perfect three-legged race partner, mums opted for long-distance swimmer and actor comedian, David Walliams, over the world’s fastest man, Usain Bolt. Suggesting that sporting prowess is no match for humour, Bolt only received seven percent of votes.

Walliams is closely followed in the poll by the sporty Duchess of Cambridge, Kate Middleton, The Voice UK’s Jessie J, and X-Factor judges past and present Cheryl Cole and Tulisa. All five were voted above England footballers with proven speed and agility, David Beckham and Wayne Rooney.

The research, conducted to mark the launch of Mr. Men Sports Day and Mr. Men Sports Day Sticker Scene - the first ever sports themed books in the iconic Mr. Men series - also explored the worst possible three-legged race pairings. Prime Minister David Cameron was voted as the person mums would least like to partner with. Hot on the heels of the Prime Minister, are speed enthusiast Jeremy Clarkson and opinionated music mogul, Simon Cowell, despite being famed for his way with women.

When it came to the infamous mums’ race, logic seemed to prevail. Around one in five of those surveyed believed Olympic medallist and I’m a Celebrity participant Fatima Whitbread would be first across the finish line, closely followed by a photo finish between musician and presenter Myleene Klass, Prime Minister’s wife Samantha Cameron (who is thought by mums to have better athletic prowess than her husband), Strictly Come Dancing’s Tess Daly and former Spice Girl Emma Bunton. Lagging behind the fastest finishers would be Holly Willoughby, Elle McPherson and Beyonce.

Although the mums’ race tends to be fiercely competitive with many parents striving hard not to embarrass their offspring, this year mums are putting their competitive spirit to one side. Over a quarter of those surveyed stated that it’s the taking part that counts and only a tiny six percent admitted they had encouraged their child to cheat at sports day.

David Riley, Managing Director for Egmont Publishing Group, publishers of the Mr. Men Sports Day books commented: “Who’d have guessed that the nation’s fantasy school sports day would mirror the wonderful silliness of our new Mr. Men books?! Nothing ever goes quite as it should in Nonsenseland and sports day is no different. I for one would love to see the Egg and Spoon race made an official sport!”

Adam Hargreaves, writer and illustrator of the Mr. Men and Little Miss books said: “Sports days bring up such happy memories, and it’s about time the Mr. Men characters had an opportunity to exercise their competitive edge, or lack of it! Writing this story and creating another misadventure in Nonsenseland was so much fun. I hope boys and girls will enjoy it.”

Egmont is the number one children’s licensed character publisher in the UK.

About the Mr. Sports Day books

Mr. Men Sports Day: There’s going to be a Sports Day in Nonsenseland and all the Mr. Men are invited, but will it be what they are expecting? A silly, fun-filled sport’s day story featuring lots of your favourite Mr. Men characters showing their sporting prowess ... or not! £2.99

About the Mr. Men Series

The first Mr. Men title, Mr Tickle, was created by author and illustrator, Roger Hargreaves in 1971, along with six other titles, including favourites like Mr Bump, Mr Greedy and Mr Happy. Since then over 200 million Mr. Men and Little Miss books have been sold in 22 countries. The books' silly stories with a simple moral lesson and brightly-coloured, boldly-drawn illustrations, became an instant success. When Roger died suddenly in 1988, Adam Hargreaves took over as the author and illustrator, and new characters are still being created today. There are 47 Classic Mr. Men and 34 Classic Little Miss stories to collect as well as many other exciting books based on these much-loved characters.

Egmont UK is part of the Egmont Group which was founded in 1878 and owned by the Egmont Foundation, a charitable trust dedicated to supporting children and young people. It is Scandinavia’s leading media group and Europe’s largest children’s publisher telling stories through books, magazines, film, TV, music, games and mobile in 30 countries throughout the world.

Mr. Shintaro Tsuji founded Sanrio in Tokyo in 1960 with the motto “Small Gift, Big Smile” and the aim of bringing happiness to people’s lives through inexpensive fancy goods. Throughout the years Sanrio has created and licensed over 400 characters, being for over 50 years a global brand that is appealing for all ages with offerings for the mass / luxury markets and everything in between. Sanrio is not only home of superstar Hello Kitty, but is today concentrating on developing significant Global strategies for other properties like My Melody, Chococat, Keroppi, Little Twin Stars and the very recently acquired Mr. Men and Little Miss.