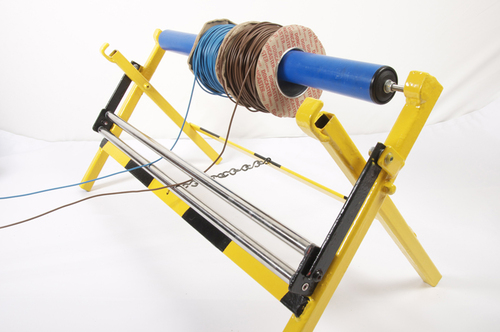 Jim Condon, a working Electrician for most of his life has developed a cable unrolling and rolling system called Cabro Eaziroll. The unique device overcomes problems caused by the constant tangling of electrical cables during installation, something which has resulted in many years of frustration for Jim.

With no available solution on the market, Jim set his mind to work in search of the answer to his problem. After a period of trial and error, the Cabro Eaziroll system was born. The innovative cable rolling and unrolling device is based on a free running feed roller, assisted by a frictionless cable guide roller. This setup totally eliminates the issue of cables working loose and wrapping themselves around the main support bar.

Cabro Eaziroll can replace unprofessional and unsafe make-shift devices such as bars or brooms held in a vice. The result is that Electricians can now rely on a professional solution to a real problem. They no longer have to suffer frustrations in climbing up and down ladders, scaffolding and access platforms numerous times a day, wasting valuable time untangling electrical cables.

The recently created company also prides itself on doing its bit for Britain. Cabro Eaziroll are committed to having the device manufactured in the UK by an approved ISO 9002 Company; adding to the number of manufacturing operations who are re-establishing themselves in The UK; putting the pride back into Britain.

Cabro Eaziroll has a suggested RRP of £199.00 and will be available to buy from professional trade outlets at the end of June 2012. Sean Morton, former Branch Manager of CEF Hexham, (newly promoted to a much bigger store in South Shields) stated "It looks, robust and extremely high quality, but more than anything, I'm really impressed with the way the cable rewinds itself, unlike other types on the market - put me down for an initial order of five!"

CEF Northern Group has since invited Cabro Eaziroll to demonstrate the unit at a forthcoming managers meeting in Newcastle, where it is hoped other Branch Managers will follow Sean's lead.