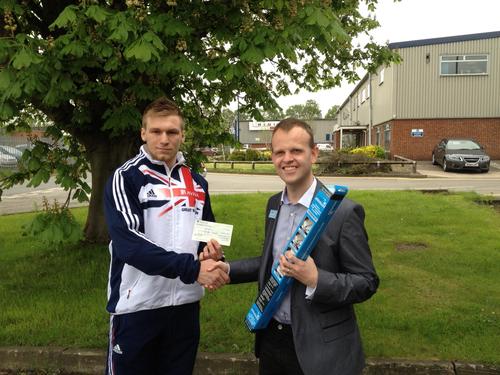 I would certainly encourage more small businesses like ours to raise funds for young athletes like Adam.

A leading Worcester firm have announced plans to sponsor 19-year-old discus thrower Adam Damadzic as he prepares for the 2016 Olympic Games.

Sports fan Neil Westwood, managing director of Magic Whiteboard, met Adam at an event at the Royal National College for the Blind in Hereford recently attended by a number of Olympic and Paralympic athletes both past and present – including former javelin World Record holder Steve Backley.

After talking to Adam, Neil was so inspired that he offered £1,000 sponsorship to help buy essential equipment and to pay for travel expenses. This will help Adam compete at the highest level and prepare him for future Olympics.

Neil explains “Of course, it’s great for us to support such an amazing young talent, right on our doorstep. We are so proud to do this and it will make the Olympics more exciting than ever. I would certainly encourage more small businesses like ours to raise funds for young athletes like Adam. It will help Team GB win more medals. And it’s good for local businesses to support local talent”.

In 2011, Adam was placed GB number 1 for discus and is a member of the Birchfield Harrier athletics club in Birmingham. He is currently training for the 2016 Olympic Games in Rio de Janeiro.

Neil Westwood appeared on the hit BBC Two series Dragons’ Den in 2008 where he impressed the panel of entrepreneurs by demonstrating his product Magic Whiteboard, an innovative alternative to office flipcharts.

After receiving offers from four of the five Dragons, Neil chose to work with Ryman (http://www.ryman.co.uk) Chairman Theo Paphitis and Deborah Meaden and secured a £100,000 investment. Today a whole range of Magic Whiteboard products are available from 237 Ryman stores nationwide.

For further information, or product samples, please contact James Ward at Ryman Stationery on 020 8971 7931 or jward@ryman.co.uk or Neil Westwood at Magic Whiteboard on 01905 451552 or sales@magicwhiteboard.co.uk.

The full range of Magic Whiteboard products is available in store at Ryman Stationery stores or from http://www.ryman.co.uk

Adam’s Olympic progress can be followed on Twitter @AdamDamadzic http://twitter.com/AdamDamadzic