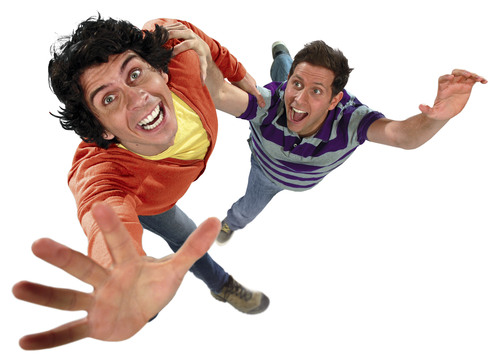 Fresh on the success of their smash-hit show - Andy & Mike’s… Big Box of Bananas - BAFTA nominated children’s presenter, Andy Day and his comedy partner Mike James, return to the Edinburgh Festival Fringe, to present the WORLD PREMIERE of, ANDY & MIKE’S… TICK TOCK TIME MACHINE. The dynamic duo has teamed-up with ‘Tweenies’ creator Iain Lauchlan to produce this latest family-friendly adventure (suitable for ages 3+). The show will perform daily from 11am at Pleasance 1, between 1 and 19 August, prior to embarking on a nationwide tour.

When Andy & Mike stumble across a mysterious machine, locked away in the garden of their ‘Fun Pad’ many years before by their great, great, great Grandfather Wally Bum, their adventure begins… Met by the machine’s guardian, they are sent on a time-travel quest. The intrepid duo must collect items from both the past and the future, and avoid being trapped in the mists of time forever. Will they make it? One thing’s certain… they haven’t a chance without the audience’s help!

Together, the star of Andy’s Wild Adventures (CBeebies) alongside his co-star Mike, combine their trademark style of humour, wit and infectious energy, with an irrepressible sense of fun, to provide audiences with a performance that will have them longing to travel back in time to see it all over again.

Andy Day is well known amongst children, for his role as a presenter on CBeebies (since 2007). He was recently one of the star line-up on the hugely successful CBeebies Live! Arena Tour (April 2012). His CBeebies’ show Andy’s Wild Adventures won Best Children’s TV Programme at the 2012 Freesat Awards, and best children’s programme at the Montana International Wildlife Awards.

Mike James children’s theatre work includes Goldilocks and the Three Bears, Cinderella, Jack and the Beanstalk and Babes in the Wood (all Pantoni Pantomimes). His TV credits include: Upstaged (BBC), Sports Relief (BBC) and The Bill (ITV). Films include: Still Life (Harry Richards), Death of a Whale (Dead Bulb Productions), and Would Like To Meet (Too Many Cooks).

Childhood friends, Mike and Andy have worked extensively together on a diverse range of projects. Their production of Andy & Mike’s … Big Box of Bananas started its UK tour at the Pleasance during the Edinburgh Festival Fringe three-years-ago, where it received enthusiastic audiences and critical acclaim.

The show’s co-creator and director Iain Lauchlan has a towering pedigree in creating quality children’s entertainment, both for stage and television. His repertoire spans three decades and includes the likes of Finger Mouse, The Tweenies and The Fun Song Factory.

This show will go on a UK tour from September 2012. See tour schedule below.