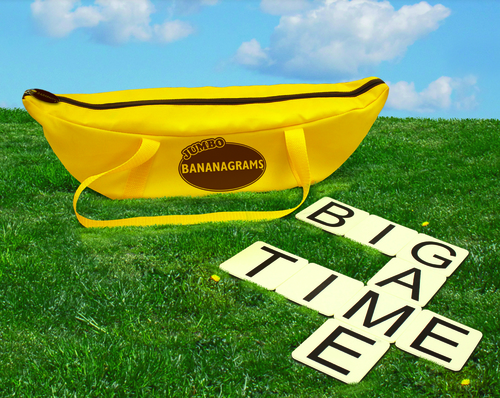 Both games are perfect for innovative outdoor play at summer barbecues, daytrips to the seaside, beer-garden lunches and in the playground

Bananagrams Inc. (www.bananagrams.com) is releasing super-sized versions of two of its best-selling word games this summer.

Hitting toy and book store shelves in the UK in time for summer, Jumbo Bananagrams is a giant version of the original international word game phenomenon, while Jumbo ZIP-IT (which has just scooped runner-up prize in the inaugural Outdoor Toy Awards) is a large-scale edition of the fast-paced two-player crossword race, that can be played in as little as 20 seconds.

Both games are perfect for innovative outdoor play at summer barbecues, daytrips to the seaside, beer-garden lunches and in the playground or, if the Great British weather disappoints, equally fun on the living room floor or in the classroom.

Jumbo Bananagrams (RRP: £44.95) features 144 waterproof, three-inch square tiles packaged in a funky giant yellow banana-shaped tote bag. Requiring no pencil, paper or board, Jumbo Bananagrams is addictive fun and educational play for kids age five to 105 at home or on the go. Players race against each other to build giant crossword grids and use all their letter tiles.

Jumbo ZIP-IT (RRP: £44.95) is an exhilarating high-speed crossword race featuring 24 beautiful wooden lettered two-inch cubes and coloured scoring zips that come built into the pouch. To play, each person takes 12 cubes and races to form his/her own crossword grid using any side of the cubes. The first player to use all his/her own cubes calls "ZIP!" and marks a point by moving his/her own zip up the pouch. The first person to score 10 points calls "ZIP-IT!" and wins the game.

Bananagrams, Inc., is the family-owned Rhode Island company behind a range of innovative word games, including the international phenomenon BANANAGRAMS - the fast, fun anagram game that will “drive you bananas!” Currently available in 31 countries and multiple languages, original Bananagrams has also spawned a series of books. Bananagrams, Inc. also offers the award-winning Appletters, Pairs in Pears and brand-new ZIP-IT and Fruitominoes. All the games feature attractive cloth pouches and need no board, pencil or paper - ideal for children and adults aged seven to 107 who enjoy witty word play, at home or on the go.