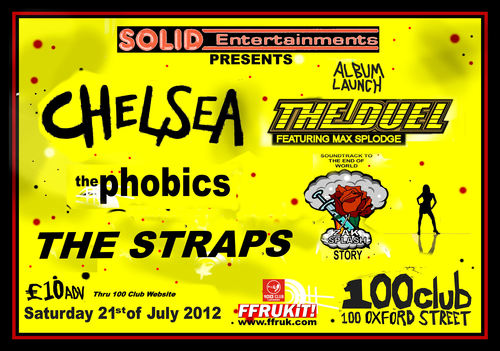 Chelsea
Are a well known punk band fronted by the Gene October. He rose to fame in London’s legendary Roxy club and recently featured on BBC 4s Punk Britannia 3 Part Series amongst other cult movies Jubilee, Caravagio, The Omen.

The Duel +Max Splodge
London DIY Now Wave Punks The DUEL also co headline the night, celebrating the release of their 4th album 'Soundtrack to the end of the world (Zak Splash Story)﻿
The band will be performing the whole album llive for fans with special guest Max Splodge of Splodgenessabounds

The Phobics
Are a Deptford based high fuelled Ramones style Band that never fail to deliver their perfect blend of catchy song in there melodic 3 chord sound.

The Straps
Punk rock straight from '77 - a late welcome addition to the bill as they join the party. Back with a fantastic new line up including the legendary drummer Pete Davies from the UK Subs who was also an original Strap on the 1st album. Jock Strap on Vocals, Mark Geraghty (original 16 Guns) Bass player & Phil McDermott from East End Badoes & Concrete Gods on lead guitar & founder member Dave Reeves on rythym guitar .
The band are currently working on a new album which promises to be a real old school punk album
﻿﻿
Tickets £10 in advance from 100 Club

If you would like a free download of the new album 'Soundtrack To The End Of The World (The Zak Splash Story) or Guest List for this Event or to interview any of the bands, please contact:
Tara Rez
tara@ffruk.com or 07958 342882