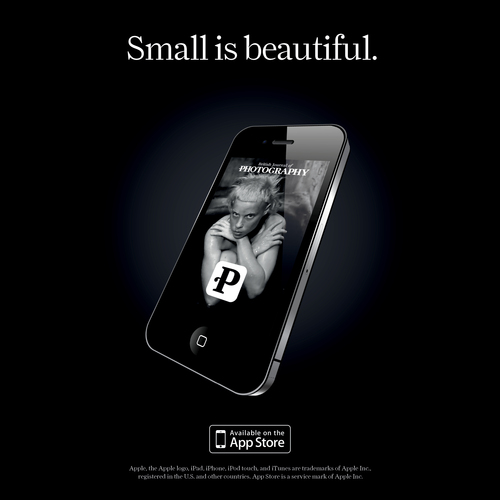 After 158 years in print, magazine creates shorter, weekly issues redesigned for the iPhone

The 158-year-old British Journal of Photography today launched a radically redesigned new edition, custom made for the iPhone.

Rather than simply shrinking existing print or iPad pages onto the screen – the method used by almost all current iPhone magazine editions – the magazine’s staff completely recreated the magazine in a format designed for the iPhone.

Each page of the British Journal of Photography: iPhone Edition has been engineered from scratch to be easy to read on the handheld, and the 100-page monthly magazine has been split into smaller, more frequent, editions that can be easily downloaded when on the move.

“Most iPhone magazines simply aren’t very readable”, said Art Editor Mick Moore. “Uploading print pages into an app is easy for publishers, but the result is a page that you have to keep pinching and zooming to read.

“Last year we released an iPad App, with each page custom-made for the tablet, so we wanted to do the same for the iPhone: make a magazine that really works on the small screen.”

Editor Simon Bainbridge adds: “When it came to the iPhone, there was no point trying to replicate what we had done for the iPad. Instead we’ve come up with a concept that includes smaller issues that appear more frequently. Of course, there’s been no concession to the elegance of the design, nor have we dumbed down our articles or the quality of the photographs that we showcase.”

The first edition of the app, which is free to download, includes an in-depth interview with photographer Roger Ballen, plus examples of his photography and video work. The app also includes live news, updated regularly, from BJP’s website (www.bjp-online.com).

British Journal of Photography: iPhone Edition is available today. Issues are free for a limited time, and reader feedback on the new edition is being sought. Weekly publication will commence this Autumn, with issues priced at GBP 0.69, with discounts for subscribers.

GET THE APP NOW

The iPhone Edition can be downloaded from the App Store. Direct link: www.snipca.com/6488.

ABOUT THE BRITISH JOURNAL OF PHOTOGRAPHY

British Journal of Photography is published by Incisive Financial Publishing Limited as a premium quality monthly magazine, available across the UK and selected cities in Europe, North America, the Far East and Australasia.

Established in 1854, it is the world’s longest-running and most influential photography magazine, defining the future of photographic journalism.

It was one of the first photography magazines to launch online, starting
BJP-Online.com in 1997, and in 2011 released a British Media Award winning iPad edition, with over 165,000 users.

Mag+ (www.magplus.com) is the most flexible and efficient platform for publishing creative content on touch screen tablets and smart phones. Mag+ premiered on the first iPads in April 2010 with the award-winning Popular Science+ application and now supports more than 350+ apps from publishers and creatives around the globe including Mad Magazine, British Journal of Photography, Hemispheres (United Airlines), Toyota, WebMD, Outside, Marie Claire and IDG. With its streamlined production system, powerful backend and feature-rich design framework, Mag+ is ideal for anyone — from magazine and book publishers to catalogue marketers and design agencies — wanting to bring beautiful, immersive content to the millions using this new generation of digital devices.