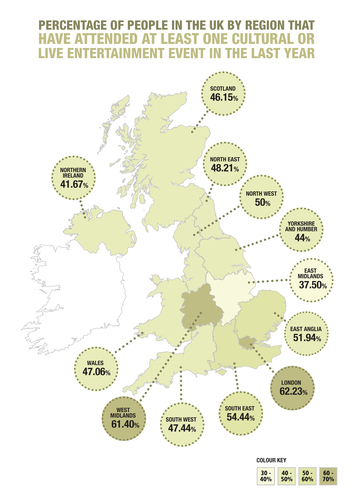 London, 5 July 2012: A new survey commissioned by global entertainment marketing agency aka has revealed that the majority of visitors to the capital are attracted by the lure of London’s vibrant cultural scene. Nearly two thirds (66.39%) of respondents said that they would like to go to a museum or experience London theatre or some form of live entertainment as part of their visit to London, whilst two million 2012 Olympics ticket holders already have plans to book or attend a cultural event.

London the ‘Cultural Capital of the UK’

1,600 adults** across the UK were asked about their attitudes towards London’s culture and entertainment offering. More than half of respondents considered London to be ‘the cultural capital of the UK’, with 1in 3 (36%) preferring to see a play or musical in London than anywhere else in the world. Over 60% of respondents described cultural and/or live entertainment as being ‘hugely important’ and felt proud of the UK’s cultural heritage, with 56% championing the support of their local arts and entertainment communities.

Over half (55%) of respondents had attended a cultural and/or live entertainment activity in the last year with rock/pop concerts (54%), stand-up comedy (52%), musicals (52%), historical exhibitions in museums (51%) and plays (46%) listed as the top five activities respondents were most likely to attend.

A third (33%) of respondents also admitted to missing an exhibition or live entertainment performance they were intending to see in the last year. Reasons cited include forgetting to buy tickets (25%), the assumption that their choice exhibition or performance would be sold out (11%), time pressures (8%) and having to be selective when spoiled for choice (7%).

Over 60% of respondents derive ‘a lot of enjoyment’ from cultural and or live entertainment activities. The survey gives evidence that residents of London, West Midlands, South East, East Anglia and North West were more likely to attend at least one or more cultural and/or live entertainment activities in a year compared to other regions in the UK. Amongst London’s boroughs, it was residents of Southwark, City of London, Hackney, Islington and Harrow who were most likely to attend a cultural activity with 80%+ residents having enjoyed a cultural experience in the last year.

Adam Kenwright, Chairman of aka commented: “I’m delighted that we’ve commissioned this survey to gain an even better understanding of our audiences. Our research proves that the general public see London as being synonymous with the very best entertainment, arts and culture and, with the diversity and range of options on offer in capital, there’s truly something for everyone to enjoy.”

Kenwright added, “This summer is a unique and challenging proposition for the capital and it’s heartening to see that over two million people are combining their excitement for the Olympics with their passion for live entertainment and culture. With the Games fast approaching, London can showcase both the West End and its thriving cultural scene to the rest of the world. We’re confident that the city will make the most of this amazing opportunity.”

*Based on recent estimated figures that 5.79 million will visit London for the 2012 Olympics Games (from the Daily Telegraph) and the statistic that 38% of those with Olympic tickets have bought tickets to live entertainment experiences (2.2 million)
** Survey by One Poll. OnePoll are members of ESOMAR and employ members of the MRS. www.OnePoll.com

aka has provided innovative advertising and marketing, promotions, digital, creative and ticket selling solutions to the theatre and entertainment industry since 1995. We are a hard-working, dedicated team of over 200 professionals, passionate about selling lifestyle experiences. With our offices in London, Manchester, Melbourne, Sydney and a full service agency in New York, we are the only global entertainment specialist advertising and marketing agency.

aka has the best minds at work on a broad range of plays, musicals, events, exhibitions, museums, arena tours and live experiences. Our UK client base reflects an exciting cross-section of the arts and entertainment industry, representing prestigious companies including Matilda the Musical, The Royal Opera House, The BBC, Dreamworks’ Shrek the Musical, The National Theatre, The Old Vic, The Royal Court, Sadler’s Wells, Billy Elliot the Musical, The Royal Albert Hall, The Royal Shakespeare Company, Disney on Ice, Batman Live, Walking With Dinosaurs The Arena Spectacular, The Science Museum, The Royal Academy of Arts, The Tate Liverpool and Imperial War Museum North. Selling tickets is our expertise, and our team have a genuine passion for promoting live experiences to wider, younger and more diverse audiences.