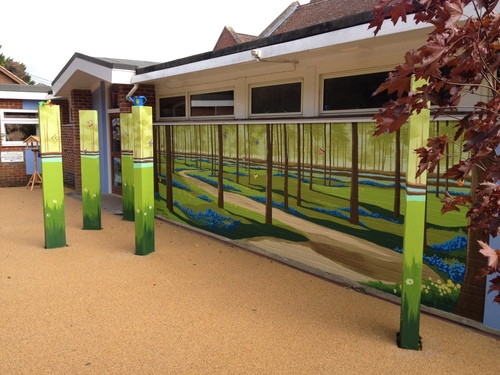 We hope the children of Heytesbury School derive pleasure from the garden for many years to come.

RonaDeck Resin Bound Surfacing featured on ITV’s This Morning as part of the series Sewing the Seeds of Love where Garden designer Diarmuid Gavin is sent around the country surprising worthy citizens with a garden makeover.

RonaDeck Resin Bound Surfacing was used in a garden makeover at Heytesbury Primary School in Warminster, Wiltshire. The garden was the idea of 10 year old pupil Archie who requested a memorial garden for his sister Isobel who died of a brain tumour whilst a pupil at the school.

The idea resulted in the existing area being transformed by Diarmuid and his team. The dull black macadam surfacing was overlaid with RonaDeck Resin Bound Surfacing using Sesame Gold aggregate to create a more cheery and attractive setting for the many flowers and shrubs planted in Isobel’s memory.

The RonaDeck Resin Bound Surfacing was donated by specialist manufacturer Ronacrete and laid by Trowbridge based and Ronacrete approved PJJ Contractors Ltd. who also provided their services free of charge for this worthy cause. It was laid over a weekend ready for the feet of the many excited children whose reactions were filmed by the This Morning team.

“When Archie made this request we were delighted for Ronacrete to be able to play its part in this wonderful tribute to Isobel’s memory. We hope the children of Heytesbury School derive pleasure from the garden for many years to come.”
Simeon Osen, Managing Director, Ronacrete